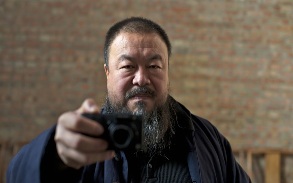 Weiwei, 54, is a Chinese contemporary artist as well as an outspoken political activist. He was named by ArtReview as the most powerful artist in the world, and was runner-up for TIME magazine’s 2011 Person of the Year.

Klayman got the ultimate access into Weiwei’s life and followed him for two years, documenting both the accomplishments and struggles Weiwei encountered. Weiwei’s personality and the risks he took made Klayman realize what a great documentary his life would make. Klayman describes Weiwei as charismatic, courageous and entertaining. It’s these traits that keep audience members engaged and rooting for him throughout the entire film.

“My real interest in the beginning was having the feeling that people would enjoy watching Ai Weiwei for 90 minutes and that it would expand their thinking of China in one way or another,” Klayman states.

And while most films showcase the main character in only the brightest of light, this documentary does a great job in revealing a full 360-degree view of Weiwei –flaws and all. That was Klayman’s intention: She wanted the audience to see him as a human being, and to get to know him on a personal level. All sides of Weiwei are shown throughout the movie, from his evasive actions that prompt him into arguments, to the discovery that he has a son with another woman who isn’t his wife. When asked who the mother of his son is, Weiwei answers with a non-descriptive reply of “a friend.”

Klayman states, “It makes more of a point when you see someone as a real human.”

Audience members really do get to know Weiwei in the film, as well as his family members and friends. Exclusive interviews with Weiwei’s younger brother, wife, mother of his child, as well as many prominent cultural figures are in the film. Perhaps the most emotional interview is with his mother, Gao Ying, who genuinely shares both her support and concern for her son. A good amount of Weiwei supporters are also filmed, and it’s clear that he has a strong band of followers forming globally.

Weiwei reaches out to his followers through various social media tools. He started with a blog, but when it got shut down by the Chinese government turned to Twitter illegally by beating what Weiwei calls “the Great Firewall of China.” Through Twitter, Weiwei shares updates, photos and inspiring messages with his followers. Throughout the movie, Weiwei is seen taking photos and engaging in social media endlessly. Klayman emphasizes the importance of social media, and says that the internet is the reason she has hope that things in China will get better.

“The internet is an unstoppable force. You can silence one person, but if the next person shares or retweets it and then the next person and so on...once someone is exposed to an idea, you can’t take it away from them,” Klayman says about the digital age today.

One of Weiwei’s biggest projects shown in the movie was a success thanks to the internet and social media. When the Sichuan earthquake of 2008 hit, many students were either killed or missing as a result of the poor construction of the Chinese public school buildings. The Chinese government didn’t reveal the names or number of the students killed from the disaster. Weiwei started a student casualties investigation, and worked hard to uncover over 5,800 student names. Weiwei formed a team via the internet, and they worked long hours to bring justice to the students and their families. Weiwei then had followers and people around the world submit a recording of themselves saying one of the names from the list. He compiled all the recordings together and played it during the Sichuan earthquake’s anniversary.

It is these defying projects that have made Weiwei such a target for the Chinese government. Throughout the movie, Weiwei is followed, harassed and even hit by various police officers. Near the end of the movie, Klayman shows the moment when Weiwei was detained for 81 days by the Chinese government. Klayman described this time as scary, and says that she didn’t know what it would mean for her movie.

No one knew what had happened to Weiwei or where he had gone. Worried fans and family members sparked a “Free Weiwei” revolution; his disappearance was of international concern. Weiwei was eventually released after 81 days, though he refused to speak about his whereabouts or give interviews.

Weiwei is now on watch by the Chinese government more than ever before.

Klayman states that, “What will happen to Weiwei next is unfortunately not in the hands of Weiwei, but it’s the result of a collaboration of what the Chinese authorities allow him to do and what he chooses to do given those conditions. My film has this important service of raising awareness of him, because he’s not completely free.”

Klayman believes her film will impact China by allowing the authorities to see the flaws in their ways of running the country. She hopes that the large number of international students from China in the United States will see her film in an official capacity and help spread its word.

“The internet is a force of change, and the important issues that China still needs to work on have to do with freedom of expression –there are so many people who agree with Wei and you can see it in the film, through his fans…this will have a huge impact.”

Through Weiwei’s battles with the Chinese government to his impressive artwork (you get a look into most of his exhibits and art throughout the movie), Ai Weiwei: Never Sorry is a movie that inspires and deals with real issues that are occurring globally. Klayman does an excellent job in revealing the issues of China through the eyes of such a likeable and daring artist as Weiwei.

“I want people to be inspired by the courage and creativity displayed by Wei and others in the film,” explains Klayman. “I want people to think, ‘What am I doing in my own context to change things I believe in?’”

Klayman wants her audience to inspire change through their own outlet, whether it’s through art, music, movies, or anything at all.

“The universal message of this film can unleash so much potential. That’s what Wei does. The end point is not for his own glory or benefit at all.”

Ai Weiwei: Never Sorry releases in L.A. on August 3. For a full list of theaters and more information, click here.