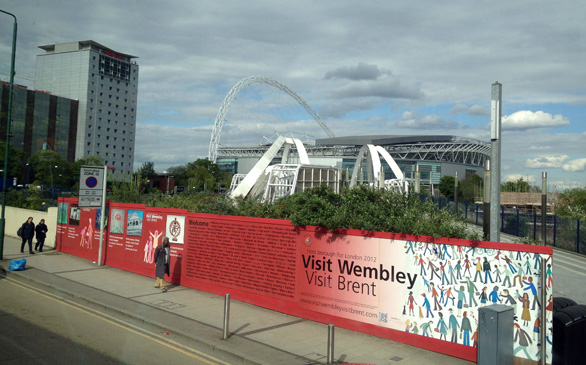 London and its venues, such as the Wembley Stadium, plays host the this year's Olympics.
(Credit: Shashank Bengali (MCT))

Secrets and rumors still surround Friday's opening ceremonies, the latest being that iconic spy figure James Bond (actor Daniel Craig) will open the show and that the very real former Beatle Paul McCartney will close it.

Music is sure to play a pivotal role at the opening event, which is directed by Danny Boyle. His films, including Trainspotting and Slumdog Millionaire, have used soundtracks as a character. A shortlist of potential songs to be played at the ceremonies was leaked to the British media in June, and it included numbers by the Sex Pistols, the Clash, the Rolling Stones and the Who. The latter are confirmed to perform at the closing ceremony.

This will be the first time in Olympic history that music from the opening and closing ceremonies will be digitally released (Universal Music Group will make it available to online retailers in Britain immediately following the event). LOCOG, as the organizing committee is known, also commissioned five original songs for the Games, featuring selections from artists as diverse as rapper Dizzee Rascal and theatrical rockers Muse.

The two-week marriage of sport and music has not come without tension, though. A small but vocal group of artists have started an online petition against what they believe is a lack of proper compensation on the part of Olympic organizers. This is where it gets confusing: The LOCOG has reached an agreement with Britain's Musicians' Union that clears the way for volunteers and headlining artists to perform free. So what's the problem? The fine print states that "professional" musicians are to be paid.

The distinction isn't quite clear. The Olympics are a showcase for amateur athletes, except for when they're not (see the participation of millionaire NBA stars).

Jazz musician Corey Mwamba has started an online petition at change.org claiming that the "LOCOG is not paying professional musicians for performing, citing that the publicity is adequate compensation." As of press time, about 4,500 had signed it. A spokesman for the LOCOG did not respond to requests for comment.

One such artist who said he couldn't afford to play the Olympics is Jan Steele, who performs in Cuban-influenced jazz act Cafecito. His act was contacted about potentially performing at an Olympic venue, and emails between Steele and event organizers show that Cafecito was offered 50 pounds (about $77) per hour for a possible 2 { -hour gig.

For acts such as reunited Brit-pop group Blur, the publicity surrounding an Olympics concert is a no-brainer. Few events - perhaps the Super Bowl halftime show - offer access to a worldwide audience, and on July 31 Blur will be releasing a limited, 18-CD boxed set, which should get more attention after the band headlines a Hyde Park concert on Aug. 12, the final day of the Olympics. But what about, say, an act performing at a rowing event at Dorney Lake, a concert without a global TV audience?

"Our agreement was that volunteers and headline acts need not be paid," wrote Isabelle Gutierrez, a spokeswoman for the Musicians' Union, which negotiated with the LOCOG. Major acts, she writes, "may well choose to perform to promote a new album."

The lines separating a professional act versus an amateur act versus a volunteer are less clear. On its website, the Musicians' Union notes that it has been made aware of examples in which non-headlining musicians have been asked to play for no or little money.

"LOCOG has repeatedly told us that all professional musicians will be paid, and yet we've seen example after example of them breaking their word," the union says on its home page. "If they want musicians to entertain thousands of people then they should pay for it. It is difficult enough to earn a decent living as a professional musician these days - where does this idea come from that musicians should be happy to work for free?"