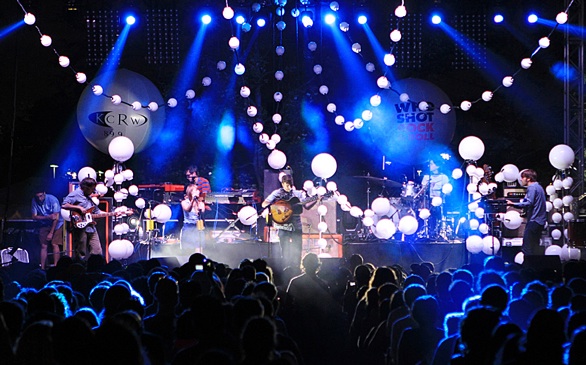 Los Angeles public radio station KCRW celebrated the 40th anniversary of T. Rex's album The Slider in conjunction with the record release of the KCRW vs. T. Rex Soundclash remix E.P. with performances by Portugal. The Man and KCRW DJs Dan Wilcox and Gary Calamar at the Annenberg Space for Photography this past Saturday, July 21. The first 500 people in attendance at the event received a free copy of the Soundclash E.P., featuring remixes by KCRW DJs Dan Wilcox, Gary Calamar, Chuck P. and Liza Richardshon, as well as a very special live in-studio cover of "Main Man" by Portugal. The Man.

The event was the second installment in a three-concert summer series taking place at the Annenberg Space for Photography to accompany its "Who Shot Rock & Roll:  A Photographic History, 1955 to the Present" exhibit. The show, which runs from now until October 7, features 166 prints of some of the most iconic names in rock and roll --though the works are not exclusive to print, nor are its subjects exclusively rock and roll musicians. Other facets of the exhibit include an entire wall devoted to album art on vinyl and cassette, music videos on loop featuring Sonic Youth's "Death Valley 69" shot by Richard Kern, and a short documentary film shot exclusively for the Annenberg Space for Photography featuring interview footage of the exhibit's photographers. Seeing as the exhibit features all mediums of work and spotlights artists across the entire spectrum of musical genres, "Who Shot Rock & Roll" offers up a tasty treat for all kinds of musical palettes.

While on the subject of food, I had the opportunity to taste some delectable healthy fare at the grocerie by foodink concession stand at the event. I went dutch with a friend on the lemon hummus plate with carrots and pita chips, and the artesian cheese box with poppy seed crackers and grapes ––both were the perfect pairings to our outdoor makeshift pre-concert picnic. Grocerie offers up healthy, tasty, high-quality food at affordable prices. I even chatted briefly with foodink founder Kate Paul, a sweet and charming Aussie whose culinary career has included her cooking for celebrity clients the Stones, Tina Turner and Janet Jackson. I was pleased to learn that grocerie has a storefront located at 1107 S. La Brea, which I undoubtedly see myself frequenting for future picnicking fares.

By the time Portugal. The Man finally went on it was about 8:15 p.m. and about a half-hour after sunset. The setting was idyllic, as the sun needed to go down to thoroughly appreciate the ornateness of Portugal. The Man's elaborate stage set-up, which included a mass of small and large china lanterns strewn above the band that altered colors to the beat of the music. Portugal releases approximately an album a year, and have racked up seven studio albums in the last six years. With such an extensive library of work to choose from, I was both curious and excited to hear what songs they'd whittled down for their set list that night.

They kicked off their set with "Mellow" and segued into "Sludge Jam," which was eventually followed by "All Your Light" and "Work All Day." "So American" was up next, setting the tone for a series of softer tracks to come. The mood was ethereal as the sky gradually faded into darker night, and Portugal opted to play the more folky, subdued tracks off their full discography. As the night progressed, however, Portugal pulled out  some of their crowd-pleasing up-tempo songs to perform.

"Chicago" was ostensibly one of the crowd favorites of the night, with practically the entire standing audience singing fervently along with the band to the song's explicit chorus, "We say burn the fucker down / Burn the motherfucker down."  Between "The Sun" and "Senseless," Portugal's lead singer John Gourley took a brief hiatus from performing to announce that the band is currently working on their next album. The crowd erupted in immediate cheering as devout Portugal fans have anticipated this album since the release of their latest project In The Mountain in the Cloud in July of the previous year. If Portugal continues as it has for the past six years, releasing an album annually, Portugal fans should expect to see a new record out hopefully sometime before 2013.

The final song of Portugal's set, the third of its three-song encore performance, was a cover of the Beatles' iconic "Hey Jude." It was the perfect close to a beautiful performance and an even more beautiful night. The entire set had a narrative quality to it, in which the band, led by Gourley, narrated the audience through a highly gratifying progression of new hits, old hits, original material and covers. Portugal. The Man performed a set that would satisfy veteran and newbie fans alike.