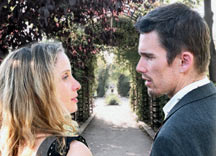 Ethan Hawke can be somewhat of a risk taker, especially when it involves choosing movie roles. He received critical acclaim throughout the 1980s and ’90s, particularly for supporting roles in films like Dead Poets Society, Quiz Show and Alive. Hawke’s taken on experimental independent parts as well, evidenced in choices such as Snow Falling on Cedars and Waking Life. Somewhere in between the two, he’s managed to strike a balance, even receiving best supporting actor nominations in 2001 from both the Academy and Screen Actors Guild for his role opposite Denzel Washington in the gritty police drama Training Day.

Hawke is currently delving into familiar-yet-welcome territory, reprising his role as Jesse in writer/director Richard Linklater’s Before Sunset, the long-awaited followup to his 1995 critical smash, Before Sunrise, which also starred Julie Delpy. Sunset picks up nine years after the conclusion of Sunrise — quite a time lapse in the film business.

"It was something we really wanted for Rick [Linklater] and Julie and I. I think we all felt incredibly grateful for the opportunity to try this," Hawke explains. "They are making less and less of these types of movies. It doesn’t really fit into any genre of filmmaking, so I was thrilled to be back doing it."

Over the course of time, people change, and perspectives and personal tastes become nuanced or fade into the ether. In this case, one might imagine it difficult revisiting a role in a story that started almost a decade ago. According to Hawke, though, the passage of time and the things that have transpired since the first film have proven useful in making the second.

"I am a much better person [now]," Hawke says with a chuckle. "The primary way I have changed is I became a father. It’s funny because they show a little clip in the beginning from the first film and I can’t believe what a puppy I looked like. But I felt so old. I wonder if that is what I will feel like 10 years from now watching this one?" Hawke adds.

The back story of Jesse and Celine’s (Delpy) previous encounter is plumed with dialogue and recollection sequences from Sunrise that are laced throughout Sunset but, although the foundation to the tale has been laid, shooting part two was no walk in the park.

"This one was harder because the first one had time cuts and montages. We met strangers and had other scenes — we were in amusement parks and on trains. This one is so stark and so naked, while the first one was considered very naturalistic. This one takes naturalism to a whole new level compared to the first one," explains Hawke. "It was the kind of thing where we knew if we did our jobs really well, it would look like we weren’t acting at all. It’s like an elegant documentary," he adds.

Sometimes the boundaries of art spill over into life and vice versa. According to Sunset’s storyline Jesse has become a novelist, and in real life, Hawke himself has written a couple of books as well, such as Ash Wednesday and The Hottest State.

"I have always seen Jesse as being one-third me, one-third Rick [Linklater] and one-third Julie Delpy’s fantasy man," says Hawke. "In a way, it is a parallel life of mine. Julie likes to say that my marriage was going great — I was just so method that I destroyed it," says Hawke. He adds pensively, "If the movie has any value, it has value beyond the relationship to my personal life."

Hawke can’t help but continue to rave about the film. "I love it. I have always believed in Rick. I think he is one of the best directors of my generation," he says. "We were just trying to make a movie about people connecting with somebody."