Anthrax: Back Together and Better Than Ever 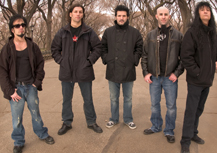 Untitled Document "I’m sorry I wasn’t Scott," Anthrax vocalist Joey Belladonna says as we end our phone conversation – since guitarist Scott Ian was my intended subject for the interview.

I’m thinking, ‘Fuck, I get to talk on the phone with Anthrax’s vocalist, the one who was with the band during its most popular years. … What are you sorry for?’

See, it goes like this: Anthrax has been around since the early ’80s. Neil Turbin, the initial singer and frontman only lasted one album, Fistful of Metal. Then Belladonna arrived to bust nuts and splooge metal classics Spreading the Disease, Among the Living, State of Euphoria and Persistence of Time. Oh, and we can’t forget the I’m the Man EP (with its kick-ass version of Black Sabbath’s "Sabbath Bloody Sabbath") and Attack of the Killer B’s. Afterward, Belladonna and the boys split. "Artistic differences," blah, blah, blah – it was long ago.

But is it possible that in 2005, the world needed Belladonna back? We thought it could never happen. But now we have the "almost original" crew back in the mix, including regulars Ian and drummer Charlie Benante, and a reunion with bassist Frank Bello and guitarist Danny Spitz. Theirs was the era of Anthrax that made people whip their heads around and go, "What the fuck is that? I need to get into that shit!"

"I got a call from Charlie [Benante] and he asked if I was interested in getting back together," begins Belladonna. "He said, ‘You’re not getting any younger.’" Once Belladonna realized that all of the guys were getting involved again, he figured, "I never got a chance to finish what we were doing in the first place," and jumped headfirst into the mix.

Four releases arrived to appease rockers in September of this year: The Anthrology: No Hit Wonders DVD and CD, and the Alive 02 DVD and CD. Currently on tour with fellow metal gods Judas Priest, the ’Thrax thrash kings are playing an hour of what Belladonna says are the "so-called bigger numbers off the old catalog … slammin’ through."

Will they write and record again? Isn’t that the next step? The singer isn’t completely sure. "It gets a little more closer to a possibility, but no one’s really thinking about that," he offers. "I think there’s a good chance of it, but I don’t know for sure. I would hope so."

It has been well over a decade since this version of the band has worked together (the "Balls of Confusion" cover duet with Bush doesn’t count). At the end of their last stint together Belladonna pondered, "We weren’t doing bad," and guessed that maybe the band felt it needed to try something different. But now he feels that "everybody’s grown over the years. We’re more mature. I’ve gotten better; they’ve gotten better."

I had to ask how the music scene has changed since he left Anthrax. Of course he mentions the Internet, but he also comments, "Vocal styles are getting different, writing is different. … The whole metal scene kind of disappeared for a while." He continues with the philosophy: "Everything you do, if you do it for real, is quality; it will find its place. People that haven’t experienced Anthrax will say, ‘Wow, you guys got something going on … [and] with humor.’"

The audience response on the Priest tour so far has been incredible. "We do what we need to do and we’re getting better every night," boasts Belladonna. "Everybody’s back. It’s a neat thing to be able to put [this reunion] together. It’s nice to have everybody attuned to what we’re doing." Indeed, Mr. Belladonna, and we are ready to experience one of metal’s most brilliant bands yet again.