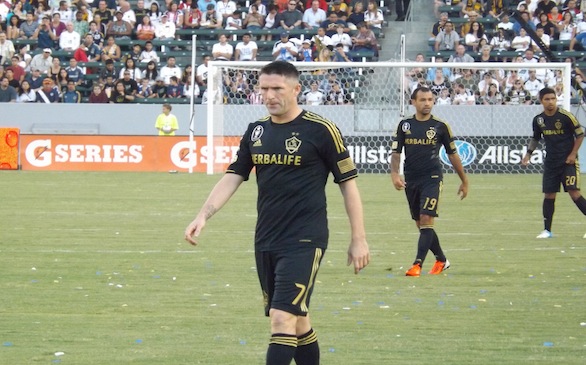 Robbie Keane (No. 7) played the first half against EPL's Tottenham Hotspur, his former team.

Even without two of their leaders in Landon Donovan and David Beckham, the Los Angeles Galaxy managed to play to a 1-1 tie against powerhouse Tottenham Hotspur of the English Premier League Tuesday night before a near sold-out crowd at The Home Depot Center in Carson.

"It was a good experience for our fans," Galaxy head coach Bruce Arena admits.

Gareth Bale netted an impressive header in the 17th minute that gave Tottenham a 1-0 edge. After a series of passes, Gylfi Sigurdsson delivered a crossed. Bale out-jumped defender Omar Gonzalez and re-directed the leather past goalkeeper Brian Perk.

Gonzalez progressed rapidly during an injury rehab after tearing his ACL while on loan in Germany in January. He has surprised nearly everyone after coming back rather quickly, striving to retain his solid playing form from 2011. He played 60 minutes against Tottenham, the most in a match thus far this campaign.

Eleven minutes after Tottenham's goal, the Galaxy knotted the score at 1-1. Brazilian defender David Junior Lopes, as he purposely slid, connected his left foot to the ball en route to netting the equalizer at the 28th-minute mark. This is Lopes's first goal with the Galaxy, who acquired him earlier this season from Chivas USA.

"We suffered a lot in the first half by letting them play," Tottenham head coach Andre Villa-Boas says.

Throughout the first half, the Galaxy outplayed and out possessed the English unit. Both Irish striker Robbie Keane and Sarvas played incredibly well from time-to-time.

"They were pretty creative, and Marcelo [Sarvas] in particular was extremely influential in creating problems for us,” Villas-Boas adds. “I don’t have full knowledge of the extent of the L.A. Galaxy, but I was pretty impressed with what we saw.”

L.A. made seven substitutions at halftime, while Tottenham changed two of its players before adding another six bodies later during the second half.

"Tonight, we had a lot of players getting experience against a first-class team," Arena says. "In the first half, we played well; in the second half, it was an excellent opportunity for our young players."

Donovan and Beckham did not play due to their participation in Wednesday's AT&T MLS All-Star Game at PPL Park in Chester, Pa. Both were voted in on July 8, and were confirmed for head coach Ben Olsen’s 18-man game day roster a week later, according to the Galaxy.

"Saturday is a game where we have to get three points," Gonzalez acknowledges.