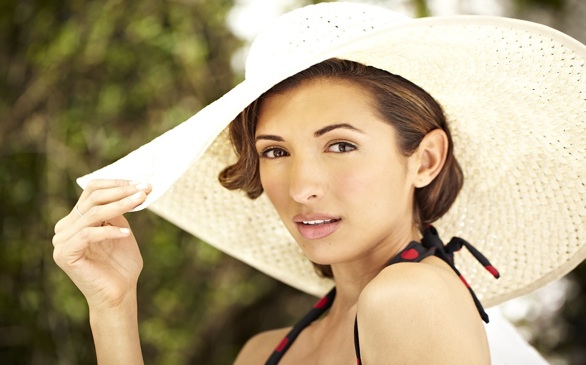 The “Jane By Design” actress has a refreshingly realistic outlook on life.
(Credit: Benny Haddad/www.bennyhaddad.com)

Usually during an interview, I ask for advice to give to anyone who wants to have a career in Hollywood. India de Beaufort’s answer surprised me, not just because she talked about how hard it is to make it, but because she mentioned the importance of doing other things that make you equally happy. She didn’t just say, "Go for it and be positive;" de Beaufort mentioned a reality that many come to face sometimes a bit too late in their quest to make it in Hollywood. But to begin with: Who is India de Beaufort and why would she say such a thing?

India de Beaufort’s interview begins with the usual introductory questions such as how she got her start. De Beaufort reveals that her parents were in the entertainment industry in England, and she originally went into the direction of the music industry.

“I kind of got into acting by accident,” she explains. “I ended up being on a children’s show. I would sing and do a little bit of acting.”

At the age of 19, de Beaufort obtained an acting role in a film that would change her life. Run Fat Boy Run was directed by notable “Friends” alum David Schwimmer in addition to starring Thandie Newton and Hank Azaria. De Beaufort is not only modest when she describes her role as “small,” but she is very humble when she talks about what is was like working on such a set at a young age.

“It was a dream come true. David was incredibly kind. It set me up to see how professional and kind people work.”

De Beaufort soon began to smoothly transition into landing other roles. Although “One Tree Hill” recently ended after nine seasons, de Beaufort was cast for the seventh season. It can be difficult to join a long-running show as the new cast member, and de Beaufort admits to feeling extremely nervous.

“I was excited to move to a new place…North Carolina. It was frightening to join a new cast, but after day one it wasn’t frightening anymore. Everyone was great.”

But what about music? Music was de Beaufort’s first passion, and she was even signed to a record label a while ago. Will she ever pursue it again? After all, we’re in an age where we have actors who sing and singers who act…

“Musically, I found it tougher and filled with colder people. With acting, it’s a more comfortable industry. I’m happy where I am.”

But de Beaufort does mention that she’d like to return to music in the future.

Now back to the industry advice that surprised me.

“I would say that if there’s anything else you can do that will make you equally happy, do that first.”

Why would a successful working actor give that advice?

“I’ve had a wonderful time, but it can be such a struggle. A false image can be projected, but in reality, 1 percent [of people who pursue acting] make enough of a living to get by.”

Why do I appreciate de Beaufort’s answer? Because it’s realistic. So many people come into the industry thinking they will be rich and famous immediately.  The reality is that it may take many years before you get to that point. De Beaufort’s point is that the decision to be a working actor should not be taken lightly.

The interview ends with theater productions she’d like to star in (“Chicago”) and directors she’d love to work with (Judd Apatow). It seems as if those dreams have an excellent chance of coming true.  Currently, she’s starring on “Jane By Design” where she plays the villain, and gets to show off her comedic chops.

I asked the question: Who is India de Beaufort? To answer, she is a beautiful, talented and down-to-earth actress who doesn’t go through life with a veil over her eyes. She is someone down for an adventure, who apparently doesn’t seem to mind the struggle or the unexpected roads that life can lead to. De Beaufort has turned her acting career, which she labeled a “happy accident,” into a successful journey.