UCLA Looks to the East 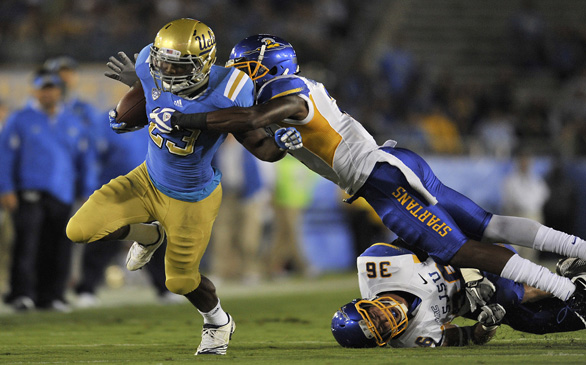 "I would love to be in China," senior running back Johnathan Franklin said during the Pac-12 media day. "Anywhere but San Bernardino."

Franklin, laughing, said, "I hear it's going to be 105 degrees out there every day."

First-year Coach Jim Mora can only hope. If the UCLA football team has been known for anything recently, it's for being soft.

Mora heard such tales as a civilian living in Seattle the last couple years. Nothing better characterized that than the Bruins' "traditional" over-the-wall ditch day, either during spring practice or during bowl game preparations.

When the Bruins ran out on practice in December, the recently hired Mora said if it happened after he took over, "they better keep going."

Tough talk to build a tough team? The Bruins will find out when they spend the first 13 days of training camp working out at Cal State San Bernardino.

"I want our team to be a team that no one wants to line up against," Mora said.

So while basketball Coach Ben Howland is having his team bond visiting the Forbidden City in August, Mora is taking his group to a bankrupt city.

"I think it will be great for us," Franklin said. "I know it's going to be hot. I think it's what we need, to get away from all distractions and grow and bond as a team."

"I wouldn't say 'soft' would be the right word," Franklin said. "I would say we have been unfocused. I believe that is going to change this year and that's why we're going to San Bernardino."

Mora said that making the Bruins tougher was not the driving force behind the move - "I'm not going out there with out there with two buses and coming back with one, or anything like that," Mora said - but it would be a beneficial side effect.

"The primary reason for going out there is to create an isolated environment for our football team to get to know each other better," Mora said.

UCLA players seem ready for this.

Freshman defensive end Ellis McCarthy underwent surgery to repair a torn meniscus in his left knee Friday. He will miss the first part of training camp. ... Mora said "a few" Penn State players have made contact with UCLA. After NCAA sanctions, Penn State players are eligible to play for another school without sitting out a year. "There are particular positions that we would want to look at a little more closely than others," Mora said. "We had a few players reach out (Monday) yesterday afternoon. But nothing has been done."