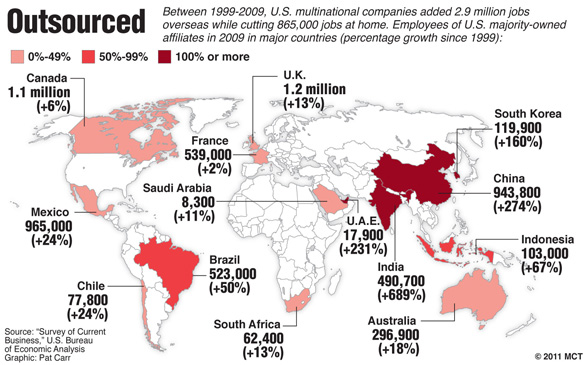 After years of shipping data-processing, accounting and other back-office work abroad, some health care companies are starting to shift clinical services and decision-making on medical care overseas, primarily to India and the Philippines.

Some of the jobs being sent abroad include so-called pre-service nursing, where nurses at insurance companies, for example, help assess patient needs and determine treatment methods.

Outsourcing such tasks goes beyond earlier steps by health care companies to farm out reading of X-rays and other diagnostic tests to health professionals overseas. Those previous efforts were often done out of necessity, to meet overnight demands, for instance.

But the latest outsourcing, which has contributed to the loss of hundreds of domestic health jobs, is done for financial reasons. And the outsourcing of nursing functions, in particular, may be the most novel - and possibly the most risky - of the jobs being shifted.

At the forefront of the trend is WellPoint Inc., one of the nation's largest health insurers and owner of Anthem Blue Cross, California's biggest for-profit medical insurer.

In 2010, WellPoint formed a separate business unit, Radiant Services, aimed at advancing outsourcing and other cost-saving strategies. WellPoint has eliminated hundreds of jobs in the U.S. over the last 18 months as it has moved jobs overseas, a company spokeswoman acknowledged.

The spokeswoman, Kristin Binns, said WellPoint's shifting of clinical jobs overseas was a small part of the outsourcing and being done through Radiant because it has the technical expertise and can ensure compliance with laws.

Nursing organizations, however, were cautious.

"It's obviously a very disturbing trend," said Chuck Idelson, a spokesman for the California Nurses Assn. "There are serious questions if you're talking about utilization reviews ... and making recommendations on procedures."

Nursing experts said there also may be licensing issues as states generally require certification for those practicing and dispensing health information.

It's not clear how many other U.S. health care companies have contracted with Radiant or other outsourcing specialists, but industry experts said companies were increasingly looking at more healthcare tasks that could be outsourced globally as they face greater cost pressures and sweeping changes in how they do business.

Health Net Inc., which is laying off dozens of information technology and accounting workers whose jobs are being sent to India, said its outsourcing has generally been confined to administrative and IT functions. UnitedHealth Group, the nation's largest health insurer, didn't respond to inquiries.

Outsourcing jobs out of the country has become a hot issue in the presidential campaign: President Barack Obama is pounding Republican challenger Mitt Romney for his private equity company's involvement with companies that sent jobs abroad.

Although such outsourcing has been going on for years, American manufacturers in recent years have brought some jobs back to the U.S. as labor costs have risen in China and elsewhere.

Some experts argued that sending jobs abroad could help U.S. companies by enabling them to tap global talent and efficiencies, making them more profitable. When U.S. companies are stronger, the thinking goes, it creates more opportunities for American workers. Also, shifting operations to lower-wage countries can help consumers by holding down prices.

Outsourcing jobs to places such as the Philippines can save U.S. health care companies 30 percent in labor costs, according to experts. But the practice remains controversial, especially with the U.S. unemployment rate hovering above 8 percent.

Patient advocates worry about crucial decisions involving a patient's care being in the hands of foreign insurance adjusters. Analysts said there was another concern as well: patient privacy.

Even something as straightforward as medical transcription can raise questions, said Uwe Reinhardt, a healthcare economist at Princeton University. Over the last year, Iowa Health System and hospitals in Utah and Washington state have joined other medical centers that have outsourced the transcribing of doctors' notes and other records.

"Suppose I'm an AIDS patient," Reinhardt said. "That person in India would know - and (the information) could be valuable to someone.... For the U.S., there's nothing more personal than health care."

Dr. Kaveh Safavi, head of the North American health practice for Accenture, a major consulting and outsourcing company that has partnered with WellPoint's Radiant, said nearly all countries have laws for protecting patient privacy.

And to safeguard patients' records, he said, heath care companies store and maintain their records locally.

As for outsourcing services that are more clinical in nature, he said, "People are looking at all the tasks that can safely and responsibly be moved. It's still an emerging market. We're still trying to understand the market's tolerance for it."

In general, hospitals are moving more slowly than health insurers to send jobs overseas. But with financial pressures intensifying and the uptake of electronic record-keeping accelerating, analysts and industry people see more consolidation and outsourcing ahead.

"When you have people's medical, billing and other records kept electronically, then it opens it up to establishing a call center virtually anywhere," said Steve Trossman, a Los Angeles spokesman for the Service Employees International Union, which represents hospital workers. "There is no longer a reason for it to be physically in the same place as the paper records."

Few have been as aggressive as WellPoint, which made a profit of $2.65 billion last year on revenue of $60.7 billion. WellPoint's total employment at the end of last year was 37,700, down from 40,500 two years earlier.

In one of its recent efforts, WellPoint laid off pre-service nurses in Colorado and Nevada so the work could be done in Manila, according to a Labor Department filing by a WellPoint human resource manager in Denver. WellPoint spokeswoman Binns said none of the decisions that involve denial of procedures or treatment for patients is made overseas.