Once a "College Thing," Social Media Now Embedded in Business 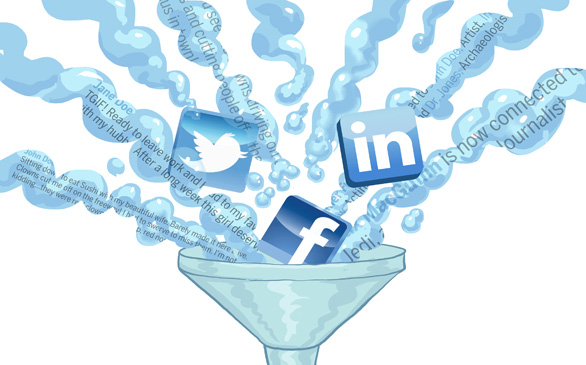 With the ink barely dry on the ruling, the St. Louis accounting firm noted the outcome on its Gray Matter blog and linked the post to a social media site - a heads up to clients and potential customers that the company intended to stay on top of the situation. An analysis of the act's potential tax consequences on businesses soon followed.

Anders Minkler & Diehl once invested time and no small amount of capital for editing, layout, printing and postage to deliver tax tips and legislative and policy updates to clients on a leisurely quarterly schedule. Now, it operates somewhat more like a digital news operation, responding immediately to breaking events on multiple platforms - anticipating clients' questions and digital searches at the precise moment they arise.

"I've been in (marketing) 30 years, and social media has changed the game more than anything I can think of, because of all the ways people can now see your message," said Donna Erbs, the company's marketing director.

As recently as five years ago, businesses and nonprofits alike still seemed puzzled at the business value of social media platforms, then derided as a what-I-had-for-lunch frivolity. Even now, they struggle to quantify exactly what impact their investments in social media and Web content produce for their bottom lines.

But the strategy is as much defensive as offensive, as it grows increasingly clear that companies with no digital presence are becoming simply invisible to many consumers.

Businesses that don't embrace social media as a marketing tool do so at their own peril, warns Steve Nicholls, author of Social Media in Business.

"Any company ignoring it is already behind," Nicholls said.

The laggards miss out on an increasingly powerful branding and promotion opportunity. Secondly, institutions lacking oversight of consumer review sites such as Yelp, where any angry consumer can rant publicly, are essentially waving a white flag on damage control. Finally - with a Jobvite survey reporting that 92 percent of hiring managers use social media to recruit - the remaining eight percent are missing the opportunity to attract top talent.

It wasn't that long ago that Kaysha Kalkofen and JoAnna Dettman, the co-founders of tSunela - a digital marketing firm with offices in Clayton, Mo., and Portland, Ore. - had a tough time selling the concept of social media to clients.

Kalkofen and Dettman say that "You want me to be on Facebook? Why? Isn't it a college thing?" was a fairly typical response to the suggestion that a company integrate social media into its marketing strategy.

A mega-second in cyberspace later, rare is the corporation, small business or nonprofit without a presence on Facebook, Twitter, LinkedIn, YouTube and other prominent social media sites. The over-arching objective is the most basic lesson learned in Marketing 101.

"The No. 1 thing you're trying to do is get people talking," said Jessi Brawley, communications director for Foster Care and Adoptive Coalition, based in St. Louis.

The experts say a successful social media strategy involves far more than signing up with Facebook, LinkedIn or Twitter.

YouTube videos of surgical procedures, narrated by the surgeons themselves, are among the most popular features.

"It's a great way to experience what happens, although it's a little gory," said marketing manager Kathleen Gruenberg.

Bound by compliance statutes, the financial service sector is another industry adhering to strict standards on social media sites.

With the need to follow strict ethics rules, St. Louis-based Wells Fargo Advisors takes its cue from fellow financial institutions in the gradual roll-out of a presence on Facebook, Twitter and LinkedIn.

"This is one place where we're happy to be a follower," said Chief Marketing Officer Chris Moloney. "We have had a lot of discussions with regulators."

Above all, the training for 15,000 financial planners and brokers stresses that the Securities and Exchange Commission rules that guide telephone, computer and mail transactions are to be stringently applied to social media as well.

"We have to tread very carefully about what (financial advisors) are allowed to say," said Jeff Leonard, vice president of digital marketing strategy.

Nicholls says proceeding with caution is key to navigating the social media landscape. The author, who lives in London, suggests companies adopt clear guidelines. It's critical, he adds, that employees understand the comments communicated via social media will be closely monitored.

(Alexia McGhee of the Post-Dispatch contributed to this report.)