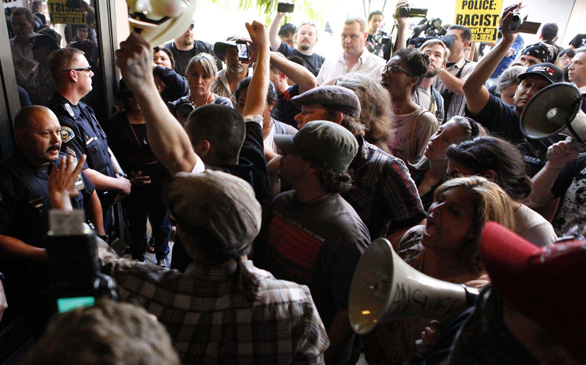 The FBI has agreed to review a controversial fatal officer-involved shooting that sparked days of unrest and violence in Anaheim.

Anaheim officials said they have also asked state officials to launch a review of the Saturday incident, which is already being probed by the Orange County district attorney. The district attorney has asked the public to share any photos or video of the shooting and its aftermath.

During unrest Tuesday night, people grabbed rocks from a nearby construction site and hurled them at officers. Others in the area ignited a fire in the weeds and in trash bins as they were chased by police.

Officials said they will continue to crack down on unlawful protests and vandalism if there are more protests in the coming days.

"Anaheim is a strong community and a community that works together to solve its problems," Mayor Tom Tait said at a news conference Wednesday morning. "I think it's important for city officials to hear from people we serve ... but violence and vandalism have no part in the conversation."

Tait said he was disturbed by the Tuesday night protesters - about two-thirds of whom city officials believe are not from Anaheim - who took "advantage of this evening of dialogue to try to create chaos in our downtown neighborhoods."

"They chose violence and vandalism over respectful communications," Tait said.

Anaheim Police Chief John Welter said the crowd grew to more than 1,000 at times. Protests were allowed to continue, he said, until the violence escalated and became threatening to police and others in the area.

After an unlawful assembly was declared, Welter said a smaller group of 50 to 100 protesters continued roaming the streets of downtown Anaheim, damaging public property and throwing rocks and bottles. Police employed nonlethal tactics, including batons, pepper balls and bean bags. Two Orange County Register reporters were injured - one hit in the head with a rock, another with a projectile to the foot - while covering the melee. Police said four others were also injured.

"We will not allow riotous, dangerous violations of the law by anyone," Welter said.

Welter said more than 20 businesses were damaged, mostly with broken windows. A total of 24 people were arrested, including four juveniles. In addition to businesses, the Police Department and City Hall also sustained damaged, Welter said.

The arrests included offenses such as assault with a deadly weapon, possession of a handgun, failure to disperse and resisting arrest.

Police said they will be reviewing video footage from Tuesday night's protests to arrest those who engaged in illegal activity.

Anaheim police were still assessing the fallout from the unrest, which took place amid growing outrage over a pair of fatal officer-involved shootings over the weekend.

"I think that given the totality of the circumstances, actually things turned out very good," said Sgt. Robert Dunn, a spokesman for the Anaheim Police Department.

(Santa Cruz reported from Anaheim and Winton from Los Angeles.)