Measure: The Air Inside Our Lungs 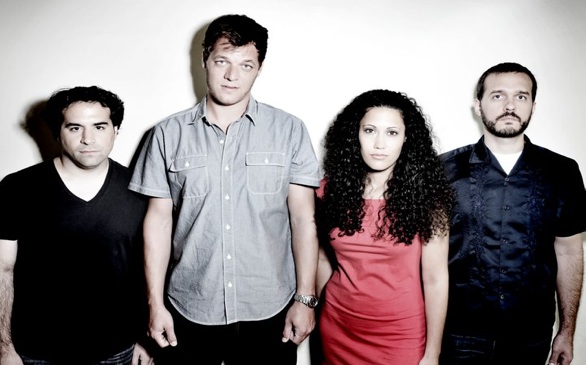 The Air Inside Our Lungs is probably best used as background music as you go about your day. That, by no means, should be taken as an insult. In fact, it seems that’s exactly what the album was aimed for.

Lead vocalist Laura DiStasi writes on the band’s website, “[We hope our music] finds its way through your headphone speakers, and into your life soundtrack. Whether you’re taking a walk in the sun or staring out the window at mountains of snow…we hope this record will keep you company.”

Measure can be categorized under indie-pop/electro-pop, and the ensemble is made up of DiStasi on vocals, piano and synthesizers, Woody Quinn playing guitar, Tommy Harron on bass and Casey Tuck beating drums. This Brooklyn, New York-based band bears similarity to Feist, Imogen Heap and Death Cab for Cutie.

Songs from their 2008 E.P. Begin Again have been heard on TV shows like “Pretty Little Liars,” “Melrose Place” and MTV reality shows, and it’s easy to see why. The entire album is very cinematic —that is, brilliant in small increments but pretty underwhelming as a whole.

While all the songs are perfectly nice and pleasant, they are nestled too safely in Measure’s comfort zone. It’s a shame that there really isn’t a big, magical, more radio-friendly song on the album that can be compared to Imogen Heap’s “Goodnight and Go” or Feist’s “1, 2, 3, 4.”

Still, for fans of this genre of music, this album is a must-listen.

As much the album cover is a perfect match for the shimmery and light music that can be found inside, The Air Inside Our Lungs can get quite heavy and dramatic with their lyrics, which is evident if you dare to bring it to the foreground.

DiStasi ruminates, “One feeling constant throughout the record is a yearning and wanting - for love, for success, for truth, for connection, for reassurance - for life on a path that feels right.”

Their blend of electronic and organic instruments as well as DiStasi’s ethereal voice is undeniably beautiful. Minimalism and rawness works for Measure.

The Air Inside Our Lungs releases August 7.