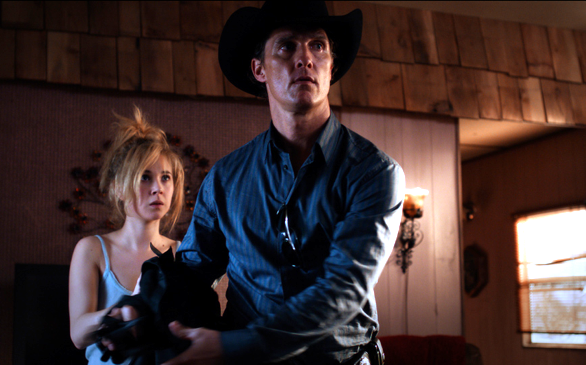 As movies and films have abandoned the art of storytelling for big-budgeted action and animated films, Hollywood has evolved into a continuous slew of shallow blockbusters. One film that contradicts that trend and looks to adhere to the true art of storytelling is Killer Joe.

The film was adapted from the Broadway stage to the big screen with legendary Oscar-winning filmmaker William Friedkin (The Exorcist, French Connection) at the helm, and an all-star cast which includes Matthew McConaughey (Magic Mike, Dazed and Confused) as hitman Killer Joe; Gina Gershon (Face/Off, P.S. I Love You) in the role of Sharla; Thomas Haden-Church (Sideways, Easy A) as Ansel and Emile Hirsch (Girl Next Door, Alpha Dog) as the bumbling Chris, who after a series of mistakes puts everyone’s lives in jeopardy. The star-studded cast coupled with a remarkable performance from newcomer Juno Temple, who is a standout as Dottie, makes Killer Joe a remarkable film.

I was excited to sit down with the cast and crew of the suspense thriller of the summer at the legendary Four Seasons Hotel in Beverly Hills. First up was the centerpiece and superstar, Matthew McConaughey, who plays the oily, snake-like villain, undoubtedly his best performance since his debut in Dazed and Confused.

McConaughey’s performance will raise the hairs on the back of your neck and disgust you, as well as titillate and creep you out. After the first couple of times you see him on the screen, you're not quite sure where he'll go –whether he is going to be the hero or a complete psychopath that is going to kill everyone. Friedkin does an amazing job pitting McConaughey and Hirsch against one another in one of the most climactic endings in recent films.

When asked about his unusual and mysterious character and how he managed to take this material into some very dark places, McConaughey explained how he zeroed in on his character, figuring out what sort of background and upbringing he would have had.

“You see how the mysterious Joe latches onto a family comprised of the eclectic ensemble of characters that surround him,” he says.

On the other hand, Emile Hirsch “first read the script cold, as I did not know it was a stage play first,” he explains.

When he read the stage play, he was able to continue to build his character.

McConaughey was excited to talk about the shooting schedule, and loved the fact that the quick one-take shooting method allowed him to stay in character and truly embrace the essence of Killer Joe.

Gina Gershon, who is a face that has not been seen in a while, was a pleasure to see on the screen. She brought a great deal playing the mother of Emile Hirsch’s character, who has a strong resentment towards her stepson. Gershon brought her intensity to her character, hiding so many things, trying to survive the impoverished lifestyle and find something better. Her character utilizes her stepson as a fuse for going off.

The hidden gem of the film is U.K.-born actress and relative newcomer Juno Temple, who plays Dottie. Her character, though slow-witted, is the glue of the family, not only because she is the key for the family getting the money they so desire, but she is also being tugged by both her brother, who Temple stated “was highly questionable,” and Killer Joe who is her “weird fucked up version of Prince Charming.”

Sharla and Dottie, though very different, have somewhat of a common approach to playing their roles.

“Rarely in a film do you get much dialogue,” says Gershon, who loved the dynamic and the organic feeling of the movie.

Temple also keyed in to say that the extensive use of dialogue added to the realism of the film. Temple and Gershon seemed to have a great chemistry with one another, as they both regaled about how they both got into acting and coincidentally, crediting Beauty and the Beast. Both felt like strange versions of damsels in distress looking for Prince Charming to rescue them out of their dyer situations.

Gershon couldn’t help but talk about her strong emotional scene with Matthew McConaughey, as scene that was chilling and will shock many viewers.

“I had to stay in that scene, just deal with and just think of it as a open scene,” she says.

Coupled with a ‘70s film style that includes plenty of nudity and graphic odd shots, Killer Joe is a film that is refreshing in an era of Hollywood cookie-cutter films. Though it’s NC-17 rating may turn a lot of people away, it’s not an overtly graphic film; the rating is more about the level of suspense and the intensity of the characters. If you have an opportunity to see this film, you should.