The Watch Succeeds at Comedy, Fails at Storyline 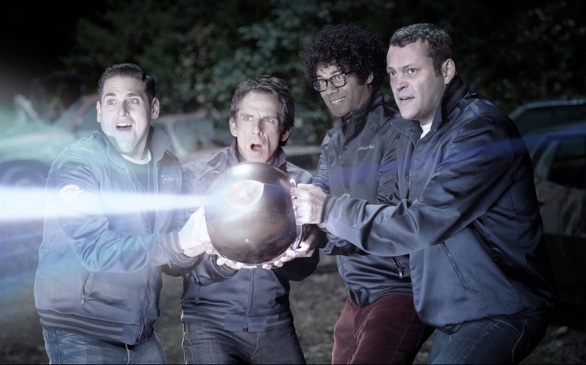 This summer has brought a barrage of comedies to the movie theater: There have been great ones, such as Moonrise Kingdom, and there have been awful ones, such as That’s My Boy. With The Watch hitting theaters on July 27, the film hopes to dethrone the hit Ted from the box office’s comedy top spot.

The basic plot centers on four men living in the same neighborhood who form a watch after the murder of a local citizen. Each man comes from a distinct background, forming a very eclectic and entertaining group. Ben Stiller plays a married Costco manager who takes it upon himself to start the neighborhood watch. Vince Vaughn plays the fun-loving father who joins the groups as a way to escape his family. Jonah Hill plays a high school drop-out living with his mother, who joins as a means to stick it to the police force that rejected him. Finally, there is Richard Ayoade, who plays a single man looking for some excitement in his life.

With a cast of three established comedians as well as an up-and-coming talent, how could this film not be box office gold? Each star has worked with at least one of the other four leads in the past, making the chemistry of the group even more natural.

“I love working with these guys,” said Stiller. “It’s good to work with people who make you laugh, and whom you’re a fan of.”

The key to movies like this is always the relationship, banter, improvisation and overall chemistry between the leads. The Watch is brimming with proven comedic star power, and this is what brings people to the theaters. Off the set these men clearly enjoy each other’s company, and according to Stiller, “they’re all just really funny guys, and when you’re a fan of them it really helps. Especially on a movie like this, a lot of it was the ability for us to have fun with each other. Hopefully if you’re enjoying the process, it translates.”

Luckily for The Watch, the overall comedy within the group can be quite funny and successful. Most importantly, the chemistry and believable relationships between the men are there. Personally, I can watch these actors in almost anything, and simply seeing them in their classic typecasts is at least somewhat entertaining. With all of them in one movie, The Watch at least salvages some points through simply having each of these actors do what they do best.

With this being said, there isn’t much else in The Watch that can really be commended. If you like Stiller, Vaughn, Hill or even Ayoade, then you will get some enjoyment out of this film. Around them though, there is literally no resemblance of a competent movie.

Director Akiva Schaffer stated that he “liked the idea of the alien as a backdrop but for it not to disrupt the comedic flow.”

That’s the biggest issue, however, as the toe between comedy and sci-fi just doesn’t work. It tries to be funny all the time, but during some of the sci-fi scenes it simply isn’t. The tone is just too erratic and takes away from the laughs. No one is going into this for action or sci-fi thrills; it’s a comedy, and if the story itself is taking away from that you have a major issue.

Stiller also made it clear that “first and foremost the movie is a comedy. Finding that tone that makes it real enough, that these real guys in that situation…find humor in all those action parts makes it feel like it’s the same part of the movie.”

However, this isn’t really the case. We see that they wanted to make a comedy and for the sci-fi backdrop to simply complement that, but the two genres just didn’t mesh well in this case.