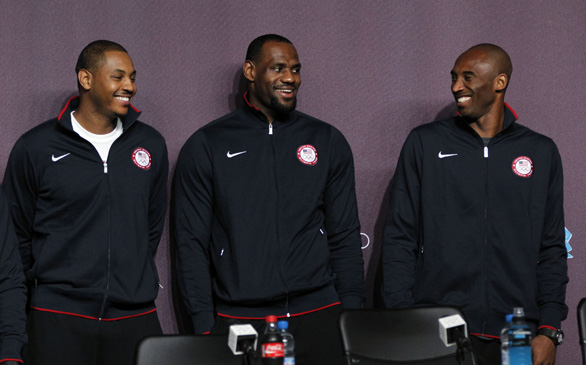 Even though this U.S. Olympic men's basketball team has lost the likes of Dwyane Wade, Derrick Rose and Dwight Howard due to injury, count Chris Paul among those who believe this squad would beat the 2008 gold-medal version.

Paul said Friday on the eve of the Olympics that he didn't know how wide the margin would be, but said his reasoning is based on the fact that most of the players on the team have improved over the past four years.

"I know if I played against myself in '08, I would beat me," Paul said. The former Wake Forest point guard also said that "LeBron James 2012 would kill LeBron James 2008."

While that logic may be somewhat flawed – for instance, would the 33-year-old Kobe Bryant of 2012 be preferable to the 29-year-old version of four years ago? – it speaks to the confidence Paul has as the U.S. prepares to open the tournament Sunday against France (9:30 a.m. Eastern).

"We're here for one reason and one reason only," Paul said. "We're trying to go home with the gold."

Paul is the U.S. team's starter at point guard, although head coach Mike Krzyzewski has been splitting the point-guard minutes almost equally between Paul, Russell Westbrook and Deron Williams.

Paul will face off in the opener against France's Tony Parker, the Spurs' point guard who nearly missed these Olympics because of an eye injury but has been cleared to play. Paul said he has seen Parker in London and he seems fine, although Parker will be playing with goggles.

"I'll just try to keep him out of the paint as much as possible," Paul said. "We've got to contain him because he's the head of the snake."

While in China in 2008, the current L.A. Clipper pledged to return to the Olympics and now has made good on that promise.

"We've been waiting for this for four years," Paul said. "I still remember the locker room after the gold-medal game like it was yesterday. I can remember all of us in there yelling and talking, saying we're going to do this again in four years. And it's finally here."

This U.S. team will have less height than the one in 2008, with Tyson Chandler and Anthony Davis the only true centers.

"But we're OK with that," Paul said, "because we have some power forwards who play like centers. Carmelo Anthony, even though he plays power forward, is one of the strongest guys here."

The U.S. team went 5-0 in a recent series of exhibitions against most of the other top squads in the 12-team tournament. The U.S. first will play every other day during pool play before moving into the medal round. The gold-medal game is scheduled for Aug.12, the final day of the Olympics.

"It's not about the defending the gold medal for us," Paul said. "It's about going out and getting this one like we don't even have one already."