Discover Geneva (Because It's Discovering You!) 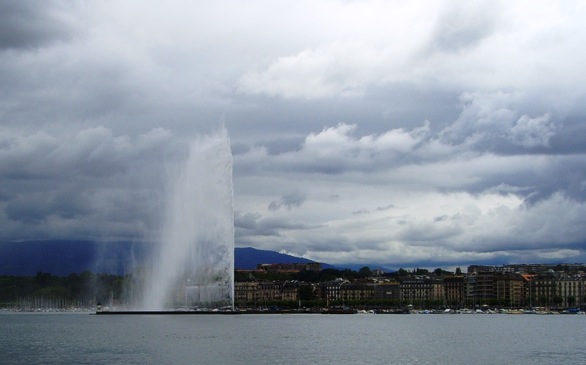 Thanks to a recent breakthrough in Geneva, Switzerland, science is one step closer to being able to explain the make-up of the universe, including something near and dear to you: that person you see when you look in the mirror. Physicists working on the Atlas Project at the European Organization for Nuclear Research, known by its French acronym CERN, believe they’ve discovered the long searched-for Higgs boson sub-atomic particle that they hope will explain how particles acquire mass. Amazingly, visitors to Geneva can take a tour of CERN that includes a peek at the Atlas Project, which sits directly on top of the project’s main component, the atom-smashing Large Hadron Collider. It’s inspiring to think of what’s going on out of sight right below your feet, almost as inspiring as the city’s many overt attractions.

Geneva is located at the western end of Switzerland in a small part of the country that juts into France, and on the shores of the sparkling lake that shares its name. One of the many things that this city has to offer is the fact that every hotel in Geneva gives you a free Geneva Transport Card upon check-in that allows you to ride all of the city’s buses and trams at no charge, and you can also use it for a ride on the “yellow boat” water taxis that ply Lake Geneva. To really appreciate the lake and get close to the city’s famous in-lake Jet d’Eau water fountain (close enough to feel the spray) take the Beautiful Shores of Lake Geneva cruise, an hour-long voyage that sails daily (book in advance, your transport card does not cover this).

If you don’t have an opportunity to get out on the lake, it’s still easy to enjoy its beauty; the city’s busy shopping district is aligned along the shore where lots of benches allow you to sit and enjoy ice cream or the like while you watch the fountain blast high into the sky. From the lakeshore it is just a short bus ride (there are lots of them) to historic old Geneva, known as the cradle of the Reformation, the 16th-century event initiated by Martin Luther and others that led to the creation of the Protestant church. This relatively small and easily traversed on foot area is dotted with cafes where you can eat outside, and they are good places to rest and people watch between jaunts to area must-sees like the Reformation Wall, where the leaders of the movement are honored with sculpture and bas-relief along the 300-foot long structure, and the Alabama Room, where the Geneva Convention was signed.

A bit further into the city from the old town and again easily reachable by bus is Geneva’s international district. Like New York City, Geneva is a home to the United Nations, and this is another place where you can take a tour. The U.N. compound is sovereign territory, not unlike an independent country, and you’ll need to present your passport in order to get your visitor I.D. and take the tour. You’ll see lots of places where business gets taken care of, and if the council is in session you may even catch a glimpse of Kofi Annan. Some of the halls here are lined with artworks from all over the world, and the gift shop is similarly outfitted with international flair. If you know anyone who collects stamps, mail them a postcard from the gift shop; the U.N. has its own stamps and the only place in the world where you can buy the European versions is right in this room. The International Red Cross headquarters is right across the street from the U.N. compound, and you can also take a tour there. The heavily-guarded and barbed wired Russian embassy is just across the street too; obviously you can’t take a tour there!

The list of things you can do and investigate in Geneva is virtually endless and it doesn’t take much effort to reveal the city’s lesser-known “hidden secrets.” For example, Mary Shelley wrote Frankenstein here, and just outside of town is the place where Mr. Peter met Mr. Nestle and they invented milk chocolate. And speaking of which, of course all the typical Swiss souvenirs are available in abundance in Geneva; just look around and you’ll see fine chocolates and timepieces on sale everywhere. Hmm. I wonder how many Higgs bosons are in that bite of chocolate?

University students interested in a summer 2013 internship at CERN can find details at ert.cern.ch. Application period begins in October.

To plan your trip to Geneva, visit geneva-tourism.ch or myswitzerland.com.