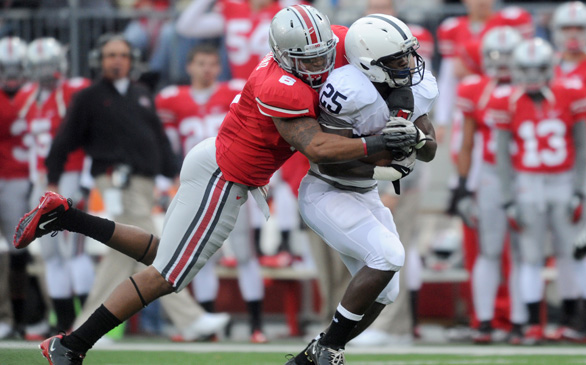 USC Coach Lane Kiffin, who reportedly visited Silas Redd in Connecticut on Thursday, isn't the only Trojan recruiting the Penn State running back.

Quarterback Max Wittek grew up in Connecticut and played Pop Warner football with Redd, who has been the object of Kiffin's desire since Monday, when the NCAA hit Penn State with sanctions that allow Nittany Lions players to transfer without penalty.

Wittek, a redshirt freshman from Santa Ana Mater Dei High, said Thursday that he phoned Redd after the sanctions were announced and probably would call him again Thursday night.

"I told him I was sorry to hear about everything that came down and that it was obviously a difficult situation," Wittek said. "But I tried to sell USC to him a little bit. I'd love to have him here.

"He said thanks for reaching out, that he was definitely interested and was just trying to take the right steps to decide what he was going to do."

Meantime, Kiffin stepped up his pursuit.

ESPN, citing an unnamed source, reported that Kiffin met with Redd for three hours. Attempts to reach Kiffin for comment were unsuccessful - the coach said this week he would not talk about players other than USC's - but Redd and members of his family are expected to visit USC as early as this weekend, according to several reports.

Penn State Coach Bill O'Brien told reporters at Big Ten Conference media day Thursday that no players had informed him they were leaving and that he had no update on Redd.

One of Redd's roommates, senior nose tackle Jordan Hill, told the Patriot-News of Harrisburg, Pa., that whether to stay at Penn State or go was "a decision that he has to make himself. It's a decision that will help him become a man either way."

During Pac-12 Conference media day Tuesday, Kiffin neither mentioned Redd's name nor answered questions about the Trojans' interest. But he took every opportunity to emphasize the Trojans' lack of depth at tailback.

Curtis McNeal, a fifth-year senior, is the Trojans' most experienced tailback. Last season he rushed for 1,005 yards and six touchdowns in 145 carries. Sophomore D.J. Morgan rushed for 163 yards in 42 carries. Redshirt freshman Buck Allen has struggled with injuries.

Kiffin had hoped that Tre Madden would supply a big-back presence, but the converted linebacker suffered a season-ending knee injury during spring practice.

McNeal said Thursday that he was not worried by Kiffin's recruitment of Redd, and that he would welcome him if he decided to join the Trojans.

"I have no problem with it," McNeal said. "It only helps us by giving us more depth."

Redd rushed for 1,241 yards and seven touchdowns in 244 carries last season and was a second-team All-Big Ten selection.

"I have no fear of losing my spot," McNeal said. "I showed the coaches what I could do last season."

Illinois reportedly had eight assistant coaches in State College, Pa., on Wednesday to meet with Penn State players. Wisconsin Coach Bret Bielema said his staff would not actively pursue Penn State players out of respect for O'Brien. Ohio State Coach Urban Meyer said he had "a problem" with coaches being able to solicit Nittany Lions players.

"The rules are what they are," O'Brien said. "It's like NFL free agency without the rules. They can do what they want as long as they tell our compliance office that they are contacting these kids."