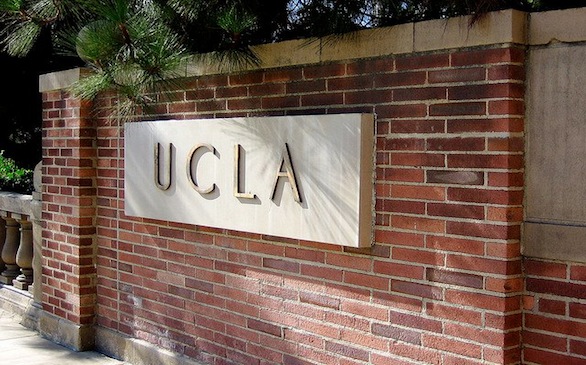 Criminal proceedings in the death of Sheharbano Sangji, 23, at a UCLA lab in 2008 are ongoing.
(Credit: Facebook/UCLA)

Criminal proceedings against University of California, Los Angeles chemistry professor Patrick Harran took a bizarre turn Thursday when the defense alleged in court papers that the state's chief investigator in the accidental death of a lab worker committed murder as a teenager in 1985.

The investigator, Brian Baudendistel, denied it.

"It's not true," he told the Los Angeles Times earlier this week. "Look, it's not me."

Baudendistel, a senior special investigator for the California Division of Occupational Safety and Health, was instrumental in building the criminal case against Harran and UCLA with a 95-page report that blamed both in the death of 23-year-old Sheharbano "Sheri" Sangji. She suffered fatal burns when a experiment burst into flames in December 2008.

Sangji, who graduated that year from Pomona College in Claremont with a bachelor's degree in chemistry, had worked in Harran's organic chemistry lab for less than three months. She was transferring about 1.8 ounces of t-butyl lithium from one sealed container to another when a plastic syringe came apart in her hands, spewing a chemical compound that ignites when exposed to air. The synthetic sweater she was wearing caught fire and melted onto her skin. She died 18 days later.

From the outset, UCLA and Harran have cast her death as a tragic accident and said she was a seasoned chemist who was trained in the experiment and chose not to wear a protective lab coat.

In late December, however, the Los Angeles County district attorney's office charged Harran and the University of California regents with three counts each of willfully violating occupational safety and health standards. After months of plea negotiations, the defendants are due back in Superior Court on Friday to be arraigned - or to announce if any deals have been struck.

In his filing, which includes a motion to quash Harran's arrest warrant, his defense attorney, Thomas O'Brien, signaled that he would seek to put Baudendistel's credibility on trial. The filing states that a judge would not have relied on the investigator's report in issuing a warrant for Harran if the investigator's juvenile record had been known.

"Incredibly, the affidavit failed to disclose ... that at age 16, Investigator Baudendistel murdered a man in cold blood during a failed drug deal and almost certainly lied or deliberately misled the District Attorney within the past two months about his involvement in that heinous crime," the filing states.

If the warrant were quashed, Harran's lawyers contend, it would mean that "no prosecution was properly brought" against Harran within the three-year statute of limitations. That could mean the charges would have to be dropped.

The defense filing contends the Cal/OSHA investigator is the same Brian A. Baudendistel who, with two accomplices in January 1985, lured Michael Meyer from a bar in the Northern California town of El Dorado to a remote area to rob him of $3,000 worth of methamphetamine.

As he rolled up on his motorcycle, Meyer, 26, was killed by a shotgun blast. His body was found a month later.

Because juvenile records in California are confidential, no case files are publicly available. Once juvenile files are sealed, there usually is no trace of the crime in the public record.

The slaying was covered extensively, however, by the Mountain Democrat and Placerville Times newspaper. Several stories from 1985 describe the case and include the juvenile defendants' names and ages. The investigator's age, now 43, appears to match that of the person involved in the killing.

Another teenager was the gunman. He testified that he shot Meyer with a gun supplied by Baudendistel -and at Baudendistel's suggestion, the newspaper reported. Baudendistel pleaded no contest to a first-degree murder charge, according to Thursday's court filing, and both teenagers were turned over to the California Youth Authority, where they could have been held until age 25.

A third defendant, 19, was convicted as an accessory to the murder and sentenced to three years in prison.

The defense filing states that a private investigator tracked down the information on Baudendistel's past and that it was presented it to the district attorney's office on June 1.

Prosecutors at first told the defense that the Cal/OSHA investigator was not the same Baudendistel, the filing states, but later determined through a fingerprint match that he was and notified the defense lawyers of that this week.

Baudendistel did not return messages late Thursday afternoon, when the papers were filed. Earlier in the week, he called any suggestion that he was involved in the killing a defense ploy.

"They are grasping at whatever straw they can," he said. "When you don't have anything else, you try to get the messenger."

Jane Robison, a district attorney's spokeswoman, said this week that she did not know if Baudendistel had a juvenile criminal record but that she could not comment on it even if he did because such records are confidential. In any event, she said, "I'm not sure that would have any bearing" on the case.

"The Cal/OSHA investigator is not the one charged here," she said.

The charges are thought to be the first stemming from an academic lab accident in the United States. Harran faces up to 4 years in prison if convicted; the UC Board of Regents could be fined up to $4.5 million.