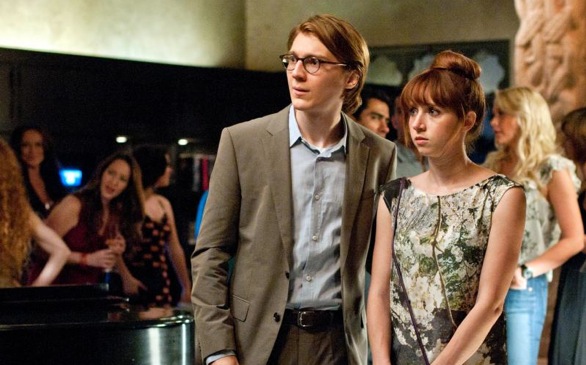 Ruby Sparks is a modern take on Greek mythology's tale of Pygmalion, a goldsmith whose disenchantment with the female race inspires him to sculpt a woman, albeit lifeless, out of ivory. Then one day, while making an offering at the altar of Venus, Pygmalion wishes his statue would come to life. When he returns home, he is met by a startling surprise . . . his wish had come true.

Adapted to suit modern times, Ruby Sparks depicts the story of washed up novelist Calvin Weir Fields, played by Paul Dano (Little Miss Sunshine, There Will Be Blood), who in a desperate attempt to resolve a persistent case of writer's block thinks up his fictional female protagonist, Ruby Sparks, played by the film's writer Zoe Kazan (Happythankyoumoreplease). What Calvin doesn't immediately realize, however, is that as he finds himself more and more immersed in his alternative reality of him and Ruby together, the fine line between reality and his imagination is synchronously blurring, until finally one day Calvin returns home to find Ruby in the flesh standing in his living room.

At first Calvin is in love with the notion of him and Ruby being together in real life, and so he temporarily abandons his manuscript in an effort to not spoil their relationship. Granted this free will by Calvin, Ruby begins to develop an identity of her own ––to some extent (keep in mind that she is still a product of Calvin's imagination). Ruby attends art classes. Ruby makes friends of her own. Ruby goes out with said friends. Ruby finds relationships outside hers and Calvin's. Ruby finds a voice to speak out against Calvin. Ruby develops a backbone, so to speak. Perturbed by these sequences of events, Calvin goes against his original plan and tweaks Ruby in his manuscript to better suit his wants.

The habit sticks and Calvin finds himself rewriting Ruby every step of the way. Each time Ruby deviates from his ideal even in the slightest, Calvin without hesitation hurries to the typewriter to jot down a few more sentences returning her back to the way he first envisioned Ruby ––ironic considering his ceaseless revisions to her character.

At long last, Calvin realizes the pitfall of his creation: that she is merely that, a creation. Though Ruby is in theory flesh and blood, she lacks arguably the most integral, vital component of being a human being: a mind of her own. Calvin's brother and otherwise sole companion besides his dog, Harry, played by Chris Messina (Vicky Cristina Barcelona, Greenberg), acts as a voice of constant rationale and hints at this plaguing fundamental hitch in his relationship with Ruby.

"She isn't real," utters Harry, his words teeming with empathy.

The film exposes numerous significant themes ––how people invent their individual and respective constructions of love, how that same love can inadvertently reinvent them, and most saliently, how love is not as simple a task as disclosing the traits of your ideal girlfriend/boyfriend on paper. Ruby Sparks depicts the gritty reality of love via Calvin and Ruby's sometimes messy, always complicated relationship. While the story's script, particularly its humor, read in my opinion quite dry and lackluster on occasions, my attention was continuously held by Dano and Messina's stellar acting performances and the film's otherwise engrossing storyline. It's definitely worth a watch.