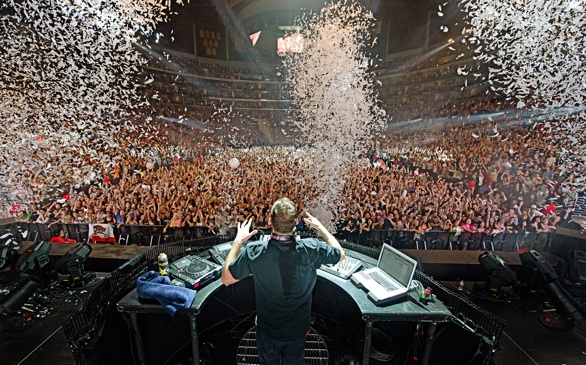 Confetti rained down on the crowd during
(Credit: Mark Owens)

At the risk of sounding hyperbolic, Kaskade’s sold-out performance at the Staples Center on July 27 was somewhat of a religious experience for those in attendance. The fans, decked out in day-glo colors and butterfly masks in honor of the Freaks of Nature tour icon, came ready to worship at the church of Kaskade.

From the moment the superstar DJ took the stage to “Eyes,” off his latest release, Fire and Ice, all attention was focused on the single man and his equipment, all hands raised in his direction, waving towards him to the beat.

The 41-year-old Chicago native was welcomed with an eruption of energy, and he incredibly was able to maintain this intense level of excitement throughout his approximately 90-minute set (something that could not be said of his recent performance at Electric Daisy Carnival, which was quite low-energy and lackluster at times).

Of course the music is what kept spirits up, but his iconic songs were aided by stunning visuals thanks to giant screens surrounding the stage, and LED displays lighting up the central JumboTron screens and the tickers that line the stadium seats.

The visual spectacles didn’t end there: bubbles filled the stadium during “Lessons in Love,” light-up beach balls bounced around through the crowd during “It’s You It’s Me,” and confetti rained down from the ceiling during “Invisible.”

The props added to the overall experience, but it was Kaskade’s signature europhic sounds that the thousands of fans flocked to Staples for. There was something for fans old and new, as he sampled tracks off his older releases, including “Stars Align” off 2006 release Love Mysterious, as well as debuting his latest single, “No One Knows Who We Are.”

Attendees went crazy for “Angel on My Shoulder,” during which Kaskade lowered the volume so his adoring audience could belt along with the lyrics. “Raining” upped the energy, as the crowd zoomed along with a cityscape projected on the screens. Another musical highlight was a mash-up of favorite “Fire in Your New Shoes” with Swedish House Mafia and Knife Party’s “Antidote.”

Throughout the show, it was clear that Kaskade was having just as good of a time as his fans, as screens projected the DJ dancing and singing along to his musical creations.

The show closed with an encore performance of “I Remember” off 2008’s Strobelight Seduction. The trance beats enraptured the audience, and the soothing vocals of Haley Gibby put attendees under a spell that was only broken when the lights came on to officially end the night.