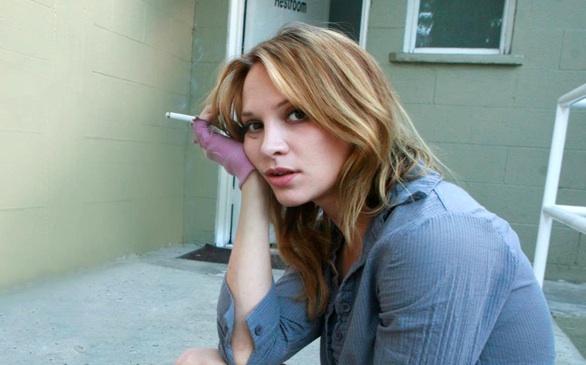 FLEA: HELEN BURNS
Red Hot Chili Pepper bassist Flea has released a six-song E.P. called Helen Burns to benefit the Silverlake Conservatory of Music. “This is not a Chili Pepper record,” says Flea. “Helen Burns is a mostly instrumental, weird and arty record and certainly not for everyone. It’s just me tripping out at home.” Fans can download Helen Burns on a “name your own price” basis through August 9 at silverlakeconservatory.com/helen_burns. The conservatory works to provide free or reasonably-priced music lessons and instruments to underserved youth.

NAAMA KATES: THE UNEXAMINED LIFE
Like so many other hopefuls, Naama Kates moved to Los Angeles to give acting a try. Since her arrival a mere four years ago, she’s registered on the starlet meter with lead and supporting roles on “NCIS” and in indie films The Ten Commandments of Chloe, Eden and Cookies N’ Cream. “But Hollywood was lonely and I never really owned a television set,” Kates says somewhat cryptically now that she’s turned her efforts to music and the release of her debut album The Unexamined Life. Kates wrote a ton of songs on a little Yamaha keyboard and got a bit of exposure for them at open mic nights, but it wasn’t until a chance meeting (she was bartending at her day job, he wanted a beer) with producer Cyrus Melchor (Nappy Roots, J Dilla & Busta Rhymes, Bell Biv DeVoe) that things really took off, and now critics are comparing her work to that of Fiona Apple. Find Kates’s live show schedule at naamakates.com.

KCRW’s MALCOLM: A REAL TOOL
Indie bands have long coveted airplay on KCRW, the hip NPR affiliate based in Santa Monica. Now there’s a tool that makes it super easy for artists to submit new music for airplay consideration and its name is Malcolm. Malcolm is an interactive website where musicians can create a profile and upload their music so that all of the station’s DJs have access to it. “It’s fast, easy, and allows KCRW to do what we do best –support and share artist’s work,” says Anne Litt, KCRW’s music program director. Find Malcolm at malcolm.kcrw.com.

FREE SAMPLER FROM BULLET TOOTH
Bullet Tooth Records has a sampler out that spotlights their summer releases, and you can download a copy for free. The 10-song freebie features contributions from Affiance, the Paramedic, Throw the Fight, Serianna, Deception of a Ghost, Memphis May Fire, Dead Icons and I, Omega. Grab your copy at bullettooth.com/download.

HALF NOTES
Long standing Los Angeles band Redd Kross has a new album called Researching the Blues, their first in 15 years, dropping August 7, and they’ll play an album release show that night at the Roxy. Nima Kazerouni escaped from war-torn Iran as a child, and it was the anxiety that resulted from that experience that nudged him into songwriting. Now Kazerouni’s band, So Many Wizards, has a debut album called Warm Nothing due August 14 on the JAXART label. Want to learn how to play the suddenly cool ukulele? The Complete Idiot’s Guide to Playing the Ukulele is now available from Alpha Books. L.A.’s Beta Wolf has a new E.P. called Just Before Morning, and they’re currently showcasing the new music on tour in the Midwest. SoCal hardcore band Xibalba is back with their sophomore release; Hasta La Muerte drops August 14 on the Southern Lord imprint.