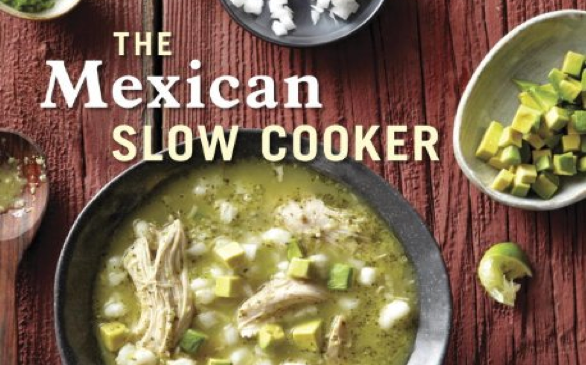 Finally, a cookbook that gives slow cookers the credit they deserve.

The Mexican Slow Cooker, written by acclaimed chef Deborah Schneider, is filled with over 65 recipes that will cut your active cooking time in half, all thanks to the handy invention of this household kitchen appliance.

Dubbed as the “reigning queen of San Diego chefs” by Bon Appetit, Schneider discovered the importance of having a good slow cooker in the kitchen. Slow cookers have a unique way of enhancing the flavors in a dish, particularly the authentic Mexican dishes that Schneider is known for cooking. This is her fifth cookbook on Mexican cooking, so her tips and guidelines are more than trustworthy.

She shows the versatility of the slow cooker and uses it for a wide variety of Mexican dishes. From her sopa Azteca (chicken soup with tortillas and avocado) to her arroz con leche (rice pudding with cinnamon), Schneider finds a way to incorporate the slow cooker to release the most flavor into her food.

Schneider encourages us to embrace our Latin side with her descriptive and easy-to-follow recipes. She includes special features on traditional Mexican ingredients and ways of cooking, such as using fresh chiles versus using dried chiles. There is a handy glossary in the back too that outlines what the key ingredients are for beginners.

She also has a special tamales section, which any tamale lover can find comfort in. Cooking tamales in a slow cooker will actually make them perfectly tender, since tamales can sometimes get over-steamed in a normal stovetop. Schneider transforms many other traditional Mexican dishes, like enchiladas, burritos and good ole’ tacos, giving them an extra kick of flavor with her recipes and slow cooker techniques.

With varying recipes for soups, Mexican street food, entrees, side dishes and desserts, The Mexican Slow Cooker has recipes fit for any Mexican cuisine lover. Schneider makes the recipes easy to understand and offers hints along the way, making this cookbook good for both beginners and experts alike. So be sure to invest in a good slow cooker (Schneider recommends a larger cooker with an automatic “warm” setting and a digital timer), grab a copy of your soon-to-be bible in the kitchen and get started! Schneider’s recipes will feed you and your friends with a belly full of flavor –for half the effort normally needed.