Tune in to speakers 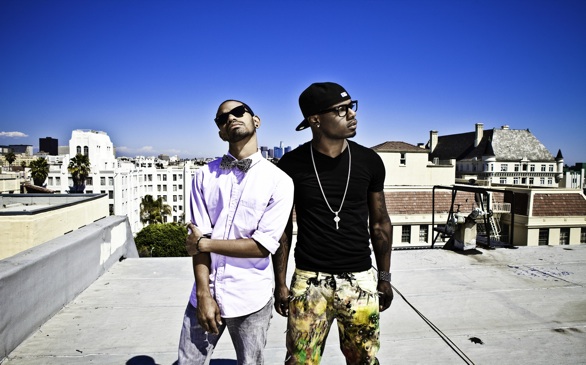 So what defines these emerging artists from the rest of the pack? Is it their youth? No. Their desire? No. Well, then their…chemistry? Perhaps, but it is something more elusive than just that.

The duo, composed of Keon B and Blair Taylor, are a match made in heaven –for lack of a more musically appropriate term. What they do in terms of creating original beats, sounds and lyrics represents an immense natural talent. More importantly, the combination of the two puts forth a profound passion and ability to create sonically eclectic tunes.

A singer, rapper and lyricist, Keon is originally from Augusta, Ga. Meanwhile, Blair, a musician and producer, hails from New Orleans. Now, speakers are a Los Angeles-based sensation en route to stardom and imminent success. Both are finding living in their new city to be an adjustment.

“I miss the food, man,” remarks Blair. “I haven’t found a place out here with food like back home. The people here are different, too.”

Keon adds, “It is just a different culture.”

The rising musical talents, who are both 21 years old, fuse elements of dance, R&B, hip hop and electronic pop to create a sound that is truly all their own, which is showcased on their four-track debut E.P., New Frequency.

Each song on the album is like its own mini-party. “Bass” – arguably one of the most contagious tracks ever – shines in speakers’ unique way to produce a hot, thrilling set for listeners everywhere. “Just give me that bass,” Keon joyfully chants throughout.

“Two and a half years ago, we were in the studio just playing around with beats, trying to make sounds,” Keon says, adding that “Bass” is the result of pure creativity. “At that time, I was just writing about how I felt. It was a cool experience to record that.”

“Bass” is a big song with a big beat, which is typical of their sound.

“They call us speakers, because our sound is big,” Blair says. “[Our name] just flows well because we need each other for that creation. When we are in the studio, we feed off of each other, and in turn, you need two speakers to hear correctly. The name represents who we are.”

Both Keon and Blair have been involved with music for a long time, since their hunger for creating it began as kids.

While growing up in Augusta, Keon wrote melodies for his church choir as a boy; following a tragic family situation, the murder of a beloved aunt, Keon experienced an epiphany. His aunt had always supported Keon’s dream of pursuing a music career, and it was that event that made him determined to succeed in this industry.

At age 17, four years after the unexpected death of his aunt, Keon moved to New Orleans in hopes of chasing the music career he had so much wanted. It was there that he met Blair, another dreamer and soon-to-be music producer.

Blair didn’t immediately want to collaborate with Keon. Patience and persistence are virtues, and those proved to be essential to Keon; after a year or so, Blair finally returned his numerous calls, voicemails and text messages. Blair, who attended the Grammy Foundation’s Grammy Camp on a full scholarship after his family lost their home in Hurricane Katrina, began to see his encounter with Keon as an opportunity, and a chance at something golden.

Speakers’ music is at times futuristic and at other times old school.

“We want to give people that sound that they have never heard of before,” Keon says.

Both Keon and Blair truly put their minds together as one to release their ideas through the waves of music. Soon, speakers’ music will be in high demand thanks to their quickly expanding fan base.

Keon notes, “We just want [our fans] to party and have fun.”

New Frequency is available now. To find out more about speakers, visit speakersmusic.com.