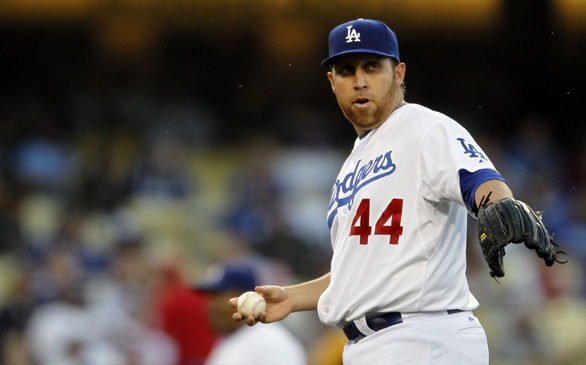 A 7-2 loss to the Arizona Diamondbacks at Dodger Stadium raised a concern for the organization and its fans. Starting right-handed pitcher Aaron Harang surrendered seven runs on nine hits and three walks through five innings of work. Harang was hit extremely hard and all over the field.

In the first inning, Arizona's first baseman Paul Goldschmidt blasted a three-run homer to give the visitors a 3-0 lead. The 24-year-old, who finished with two hits, is showing an enormous sign of power, and he out-played Harang in this particular instance. Goldschmidt sports 14 home runs, 51 RBI and a .292 batting average. Harang (7-6) is a veteran, and could have pitched the youngster more carefully.

Then, the newly-acquired Chris Johnson hammered a grand slam during the fifth, plating Aaron Hill, Jason Kubel and Miguel Montero en route to enlarging the D-backs' lead to 7-0. The homer arrived with two outs, and, again, Harang could have been more careful.

Harang, however, acknowledges his frustration over two bad pitches.

''The fact that two pitches were what changed the game was frustrating,'' Harang told reporters after the game. ''It's tough to get two outs and give up a slam.''

The Dodgers, who currently sit in a tie for the NL West lead, came off their first back-to-back shutouts of 2012.

Harang's seven runs allowed did raise questions about his future on the team --Los Angeles has been active during the trade deadline in this campaign, arguably the most busy time ever for them in history since the team's new ownership group has expressed its desire to win, and win now.

After Harang's outing, it is very clear that the Dodgers need another arm -- and preferably a righty -- to bolster a rotation that includes ace Clayton Kershaw, Chad Billingsley and Chris Capuano. If a seven-game postseason series was on the verge of beginning, L.A. would probably have Harang come out of the bullpen as a reliever --but that is just a prediction. Nothing is set in solid stone, especially with Dodger manager Don Mattingly, who likes to experiment often with his line-up.

But he wasn't the only problem, as the Dodgers exhibited a lack of offense Monday. Where was it? Yes, Los Angeles scored twice. But a line-up highlighted by Matt Kemp, Andre Ethier and Ramirez should be able to produce more. Right?

Kemp did his part, contributing a 3-for-4 display with an RBI double that scored Juan Rivera. Ethier finished 1-for-4; Ramirez was 0-for-4.

D-back Trevor Cahill (9-9) had something to do with that, though. Cahill posted six solid innings of shutout ball, allowing six hits, one run, fanning four and walking three.