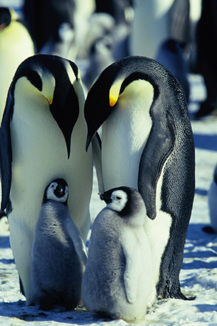 Untitled Document Among the breakout stars of the summer movie season were thousands of waddling flightless birds and dozens of New York City fifth-graders learning to dance.

March of the Penguins and Mad Hot Ballroom are documentaries, a form of cinema honored more in theory than in practice.

"For years the average person regarded a documentary as something you were force-fed in school," said Melanie Martin, founder and long time director of the Little Rock (Ark.) Documentary Film Festival.

"But look what’s happening. We’re seeing more and more documentaries being shown by mainstream cinemas in smaller and smaller cities. It’s trickling down. Young kids who have never seen a documentary before are watching March of the Penguins."

To date that French-made nature documentary has earned a whopping $70 million in U.S. ticket sales. The numbers for Mad Hot are considerably more modest – almost $8 million – but still monumental by the standards of documentary movies.

Both have a ways to go before surpassing the box-office numbers racked up by Michael Moore’s Fahrenheit 9/11, which in 2004 pulled in $119 million, setting an earnings record for a non-fiction film.

The critics have been happy, too. Recent documentaries like Penguins, Ballroom, Murderball, Rize, Born Into Brothels, Wild Parrots of Telegraph Hill, Grizzly Man and Enron: The Smartest Guys in the Room have won rave reviews.

"This is the first time since the beginning of cinema that audiences have flocked to documentaries," said Rob Moss, professor of film at Harvard and a documentary maker (Same River Twice). "… People are paying the same dollars they would to see Terminator 12 – and I’m talking about baby sitters, popcorn, the works – to watch documentaries. The question is ‘why?’"

Documentarian Barbara Hammer, who visited Kansas City last month for the Kansas International Film Festival, thinks it’s because Hollywood feature films are so bereft of new ideas that they are cannibalizing themselves.

"The plots are so pedestrian and predictable," she said. "It’s like they’re all following the same book on how to write a screenplay."

"Documentaries are becoming popular because there’s a need for them," said Sandra Ruch, executive director of the International Documentary Association, which has 2,700 members (mostly filmmakers) in 50 countries. "Audiences are demanding other stories, not just Hollywood stories. They want something from the real world."

Increasingly, documentarians see themselves not as journalists but as storytellers who limit themselves to nonfiction source material.

Buoyed by recent hits and increased public interest, makers of nonfiction films believe they’ve turned a corner. But it will always be an uphill fight.

"It’s true that today there’s a much better chance of your documentary being seen," said Ruch. "But it’s still difficult. Even getting on TV is a struggle. In part that’s because of the competition for a slot. The ease of video technology allows more people to make documentaries than ever before.

Simply being good isn’t enough. This summer Murderball, a documentary about wheelchair rugby players, received some of the year’s best reviews but failed at the box office. Audiences apparently couldn’t be enticed to see a movie about men who had been paralyzed. It sounded like a downer.

Harvard’s Moss agrees, but only to a point.

"Things are very exciting right now," he said. "Because money’s being made, documentary makers could find themselves being co-opted. We’ll get faux documentaries that replicate the form simply for profit.

"The only way to protect ourselves is not to avoid the game but to become smart at it. Documentary makers need to understand agents and deals so we aren’t taken advantage of."

One answer, Buirski said, is to keep the audience in mind so that making documentaries doesn’t become an ivory-tower affair.

"When audiences are as willing to see a documentary as any other film, then you’ve made huge strides," she said. "But you can’t start boring them. You’ll always be competing with studio films, and that means that successful documentaries have to be well shot, well edited and entertaining.

"Michael Moore has it right. Your film is dead unless it’s entertaining."