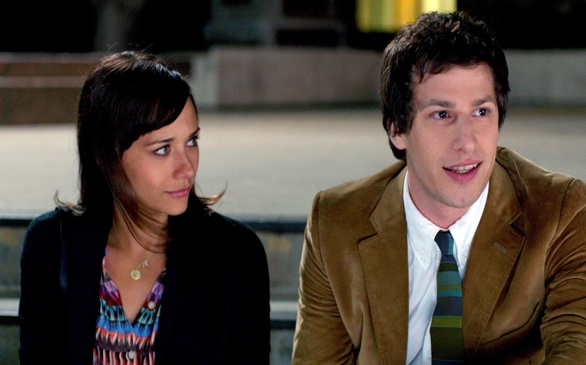 In this witty and quirky rom-com, Celeste, a savvy trendspotter for a high-end Los Angeles firm, has had enough of Jesse’s lack of motivation and his long history of unemployment, and decides it’s best to end their six-year marriage and try to remain friends. Although both still have lingering feelings for each other and secretly believe they will get back together, they take the adult approach and try to see other people.

Co-written by Jones herself along with her writing partner, Will McCormack, who stars as Skillz, her pot-smoking, ladies man of a friend, the film spans through a familiar pattern couples sometimes fall into after a breakup: the inability to let go of each other.

“It definitely is a collection of relationships that I’ve had, that he’s had and people we know have had,” says Jones. “We used a lot of ourselves in it.”

Having met years ago after McCormack’s sister set them up, McCormack and Jones remained close friends and embarked on the idea of Celeste and Jesse Forever nearly four years ago, allowing them to have a clear perspective for the script.

“We dated very briefly, but it was very intense,” adds McCormack. “We knew that we were meant to be in each other’s life in some capacity, it just wasn’t that. We were meant to maybe write movies together, and we’ve always wanted to be writers, and [we were] always encouraging each other to write. [For this movie], we were writing six days a week, in her backyard, on one computer, side-by-side for four months.”

Jones as the business-orientated woman with an under-achieving boyfriend is a topic many female viewers will be able to relate to. Yet, her choice to get ahead soon makes her realize her selfishness, driven by her need to always be right.

After having more than her share of failed romantic encounters herself, Jones admits Celeste’s flaw is ultimately the most important lesson she’s learned in keeping a relationship strong.

“It’s all about not having to be right; to just communicate in a way with your partner where you guys don’t have to agree upon something, but you respect each other’s decisions and opinions enough to live and co-exist in a respectful manner,” says Jones.

The film does a beautiful job of delving into the deeper, emotional depths of reaching the next step of adulthood, which will only come by letting go and moving towards your own happiness as individuals.
While the movie is definitely full of laughs, it’s true success lies in the incomparable chemistry Jones and Samberg share.

Samberg, who gives a great performance in a role unlike anything he’s ever done, managed to reach a higher level through this film. First-time director, Lee Toland Krieger expressed nothing but gratitude to have been able to discover Samberg’s potential to perform outside of comedy.

“Andy is so incredibly smart and such a talented performer, but hasn’t been given an opportunity to play a part like this,” says Krieger. “He personifies that 30-year-old man-boy, but yet he’s so vulnerable and sophisticated. He’s got a lot to offer besides comedy.”

In an effort to break away from the usual romantic-comedy conventions, Celeste and Jesse Forever steers away from your typical relationship clichés and gives a fresh outlook on adulthood and relationships and all of the idiosyncrasies in between.

The film really belongs to Jones, who shows her range of acting as well as demonstrating her talent as a writer.

“Being the co-author of the script, there is a lot of Rashida in Celeste: she’s bright, driven, successful, and I think a lot of that comes through in the writing,” comments Krieger. “I think the product is better because she brought a lot of herself into it.”

Already working on another script with McCormack, Jones wouldn’t be surprised if she found herself directing next.

“I have a similar relationship with directing that I do writing: I’m intimidated by it. I think it’ll take me a little bit of a jump to get there,” Jones says.