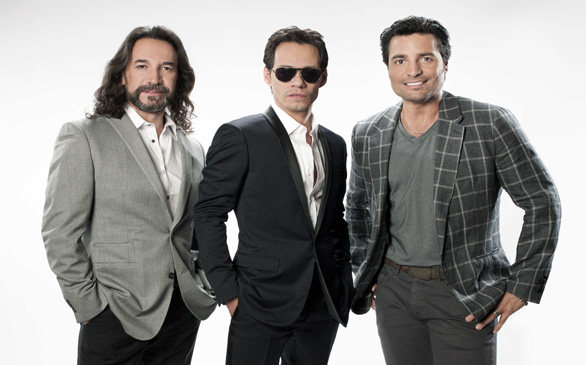 On top of being world-renowned music artists, what do Marc Anthony, Chayanne and Marco Antonio Solís have in common? A tour named GIGANT3S.

"[The tour] could have been called 'Amigos,'" says a pensive Solís, refering to the close friendship the three singers have with each other.

While providing a distinctive laugh, an energetic Anthony jokingly remarks, "Panas," a slang word in Spanish that means "friends," which is used in several Latin American countries including Puerto Rico, where Anthony's family originates.

On the other hand, Chayanne, known for his humble ways, gently adds, "Glamour."

This gigantic trio really is like no other, and they will embark on a special musical tour around the U.S. beginning August 3 in Miami and ending September 14 in Las Vegas. Additionally, the tour features a much-awaited stop to Southern California's Honda Center in Anaheim on August 24.

"I am very happy to be participating in such a lovely project, an experience that we will all live," Solís says.

Latin music stars have rapidly increased their recognition in the English-speaking states, where the Latin community is often prominent. Whether audience members originate from the Caribbean, South America, Europe or Central America, they all share two things in common: the language of Spanish and their passionate love for such acts as Anthony, Chayanne and Solís.

"Our fans really do not identify themselves by nationality, [but by] their mutual likeness in the music," Solís says. "The three of us have walked the same path with fans throughout different countries. The reception that fans give each of us is very similar."

"We are very fortunate to have been part of people's lives," Anthony expresses, agreeing that their music has been able to help fans in some unique way. "...Music is that powerful. To me, it is just unbelievable...[our] songs have been part of our lives, but of fans' [lives] as well."

Chayanne hints at nostalgia. "Another thing about that is it reminds you of moments," he says, adding to Anthony's point of view. "With this [music], you can see yourself in the past and remember when you fell in love the first time. That is just beautiful. We have fun doing it."

Throughout the years, the NYC-born Anthony has been one of the most influential singers while serving as an ambassador for Latin music and culture. A global brand for the salsa genre, Anthony has registered sales of over 12 million albums.

"I think everybody gets into the music business to show themselves," reflects Anthony. "As a kid when you dream, it is almost therapeutic - at least for me."

Remarkably, Anthony, who also acts and produces, is the top-selling tropical salsa artist of all time. The two-time Grammy and three-time Latin Grammy Award-winner has numerous hits under his belt, including the popular tracks "I Need To Know" and "Valió La Pena" (It Was Worth It). Anthony, known to modify his musical set in each of his shows in order to deliver a unique entertaining experience, is the tropical and upbeat element of GIGANT3S.

Born in Puerto Rico as Elmer Figueroa, Chayanne achieved success since day one with his adorable Latin pop. Chayanne, a two-time Grammy Award nominee, has sold over 20 million albums and recorded 21 total music productions that include several romantic melodies in the form of ballads and dance tracks.

Chayanne's repertoire sports classic hits in the likes of "Provócame" (Provoke Me), "Completamente Enamorados" (Completely In Love) and "Fiesta En América" (Party In America). His latest release, A Solas Con Chayanne, is the second live album in his musical catalogue. It was recorded during his concert at The National Auditorium in Mexico. To GIGANT3S, Chayanne adds a romantic essence.

Solís truly does not need an introduction. This Michoacán, Mexico-born icon is a true musician, having written, sung, composed tunes and produced records since the mid-1970s. Formerly the musical director and lead singer of Los Bukis, Solís's admirable demeanor and impeccable career have guided him to accumulate over 20 albums and record more than 300 songs.

"Personally, I am very thankful to the fans,"  Solís says.

A solo artist since 1995, Solís is the author of many distinguished pieces. "Tu Carcel" (Your Prison), "Más Que Tu Amigo" (More Than Your Friend) and "Si No Te Hubieras Ido" ("If You Hadn't Left") are prime samples. Solís figures to be an important element of GIGANT3S, giving the public an opportunity to recall vivid memories based on his memorable music collection.

Each concert could last and even surpass the three-hour mark, according to the three singers.

"It is a tour for people who love music," Chayanne acknowledges. "Each of us has his own genre. We each have many years in our respective careers...to share this energy will be marvelous. We are headed with a lot of joy to present the show. And the beauty of it will be to link our music styles and create a party on the stage."