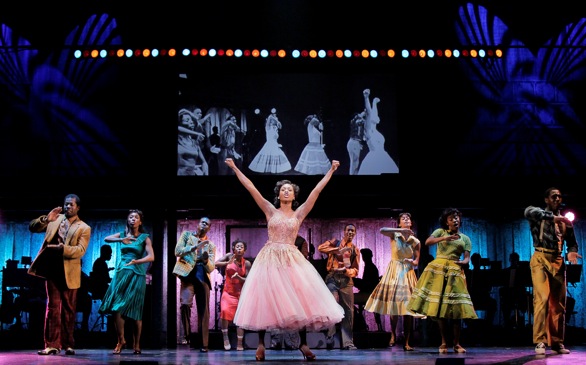 Crank up that dial, eager listeners, and prepare your ears for the sweet sounds of Motown blues with a heavy dose of rock ‘n’ roll. This very well may be your parents' (or grandparents') music, but way back when, bopping and jiving was synonymous with the devil’s music, and no God-fearing Christian would find themselves in league with Satan.

The time is set some year between 1950 and 1960, and the stage is Memphis, Tennessee – more specifically, Beale Street’s famous music-filled, underground clubs where the white folk just don’t venture. It’s here that Huey Calhoun (Bryan Fenkart) falls in love with the singing soul sister, Felicia (Felicia Boswell) despite the segregated South ridden with hate crimes and antagonistic anti-black sentiment.

Huey is a young man enamored by the growing rock movement who is determined to make a name for himself when the world realizes it loves this music as much as he does. He somehow weasels his way onto the radio, playing the bluesy soul music that white parents fear most. But Huey is determined to make this music not only acceptable, but popular as well.

Huey first must gain the trust of Felicia, her brother Delray (Quentin Earl Darrington) and their charming cast of friends, dancers, singers, bartenders and music lovers. Despite his mother’s direct opposition, Huey becomes the biggest radio host in Memphis and can be cited as the first to play black music on a white station.

He and Felicia fall into a mutual love that unfortunately must be kept underground after a vicious attack scares their relationship into hiding.

Huey is now on  television and Felicia has the opportunity to go to New York to live her dream as a headlining singer – but can Huey leave his home, and his heart, in Memphis?

Winning four Tony Awards in 2010 including Best Musical and Best Original Score, "Memphis" is everything you want in a musical: a captivating story, show-stopping performances, music that stays stuck in your head for days, and dance sequences that makes you wish you had toughed it out in the fourth grade when your mom let you quit tap. In the production now at the Pantages Theatre through August 12, Fenkart and Boswell have an undeniable chemistry that oozes off the stage, and even the supporting characters are an integral part of bringing this age-old story back to life, re-infusing it with song, dance and a whole lot of flavor.

“Memphis” is running now through August 12 at the Pantages Theatre, 6233 Hollywood Blvd., Los Angeles. Tickets start at $25 and can be purchased by calling 800-982-ARTS or online here.