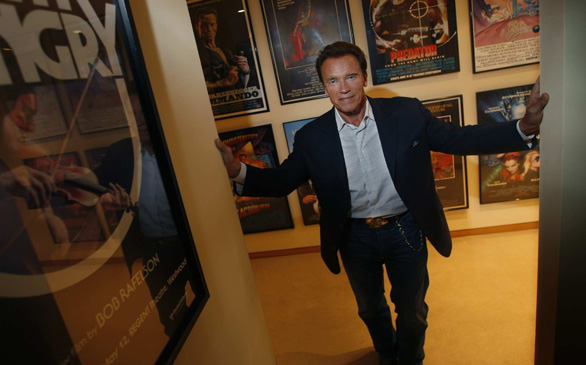 The University of Southern California and former Gov. Arnold Schwarzenegger on Wednesday announced a partnership to establish a think tank that will seek bipartisan solutions to environmental problems, economic policy, political reform and other public policy issues.

The USC Schwarzenegger Institute for State and Global Policy will be funded with a commitment of $20 million from the former governor that will include a personal donation as well as money from his fundraising efforts. USC officials said the endowment is expected to be fully funded within two or three years. Schwarzenegger's initial gift is confidential, officials said.

"When you think back of everything I've done - body building, training people, writing about diet and food supplements and promoting movies and entertainment - I've always been interested in making sure other people can benefit from my experience," Schwarzenegger said in an interview. "And it's the same with this. It would be a shame to think what I learned from my governorship over seven years ... ways of solving problems - will now be left behind and no one will benefit."

Schwarzenegger will chair the institute's Board of Advisers and will hold an appointment as the Gov. Downey Professor of State and Global Policy at USC, named after John Downey, an Irish immigrant who in 1860 became California's first foreign-born governor. Downey also helped found USC.

Serious scholar is the latest face for Schwarzenegger, who parlayed success as a professional bodybuilder, actor and businessman into his election as California governor in 2003, following the recall of Gray Davis. The Austrian-born Schwarzenegger became the second foreign-born governor of the state.

His experience in the rough and tumble world of state politics, especially during a special election in November 2005 when four ballot measures he sponsored were defeated, have informed his latest endeavor, Schwarzenegger said.

"How do you negotiate when you have two parties, how do you bring the ideology of those two together to come up with something that is beneficial to all people and not get stuck on ideology. This is another important issue we're going to deal with," he said.

He also expects to make use of his celebrity cachet.

"This is something I'm very passionate about, and I'll be involved in bringing talent from around the world to USC to do lectures and seminars," Schwarzenegger said. "My strength is that I'm very well known internationally and can take that message to other universities overseas and in this country."

The Schwarzenegger institute will be housed at USC's Sol Price School of Public Policy.

"We're very excited about this because USC has had a deep commitment to civic engagement, especially with the Sol Price school, with a lot of different programs over the years locally, nationally and internationally," said USC President C.L. Max Nikias. "From an academic viewpoint, the institute fits very nicely into the overall mission of the university."

Members of the initial board of advisers all have close personal or working relationships with Schwarzenegger. They include: Henry Cisneros, former San Antonio mayor and President Bill Clinton's secretary of Housing and Urban Development; Vicente Fox, former president of Mexico; George P. Shultz, a statesman who served as U.S. secretary of State under President Ronald Reagan; Rajendra Kumar Pachauri, chairman of the Intergovernmental Panel on Climate Change, which was awarded the Nobel Peace Prize in 2007; and Kandeh K. Yumkella, director-general of the United Nations Industrial Development Organization.

The institute's first public event will be a symposium on Sept. 24, and Schwarzenegger's first lecture is planned for early December.