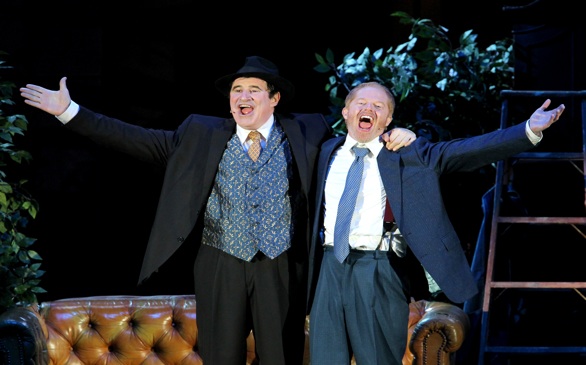 “The Producers,” a satirical dark comedy written by the brilliant comic mind and the winner of three Tony Awards Mel Brooks, was a pure a wonder and a delight to watch.

The all-star cast and crew had to overcome many obstacles while preparing for the three-day run at the Hollywood Bowl this past weekend: the cast not being finalized until May, short rehearsal time (a mere two weeks), problems with transferring the show to the vast Bowl stage, etc. Even under all of these confinements, the cast and crew were still able to pull off a really enjoyable show and successfully take the crowd (it was close to full house and the venue can seat close to 18,000) on an insanely hilarious adventure. The comic level of this musical remained high throughout the whole night. It was ridden with jokes that made you want to laugh out loud or groan every few minutes.

The onstage logistics were genius as well. The famed director and choreographer Susan Stroman, who has also won the Tony Award for both her choreography and direction, cleverly positioned the orchestra at the back of the stage, and had the Shubert Theater façade take up almost half the space of the stage, so that it solved the problem of the cast looking like they are being swallowed by the immense Bowl stage. The end result is a very complete visual set-up with the cast absolutely owning the stage and dancing the award-winning choreography lively.

Based on Mel Brooks’s Oscar winning film with the same name, the plot of this musical is about a down-on-his-luck and financially struggling Broadway producer, Max Bialystock (Richard Kind) and his meek accountant, Leo Bloom (Jesse Tyler Fugerson), who team up to devise a scheme that would oversell all of their investors’ shares and swindle them out of millions by producing the most infamous flop in history.

Let me paint you a picture of how “awful” this guaranteed flop they are planning to produce is. The name of the musical is called “Springtime for Hitler,” written by a neo-Nazi pigeon fanatic Franz Liebkind (Dane Cook), directed by the cross-dressing “worst director” Roger De Bris (Gary Beach) and his equally gay “common law assistant” Carmen Ghia (Roger Bart), and complete with a gorgeous blonde, Ulla (Rebecca Romijn), who only has a tenuous understanding of English playing a main role. I’ll keep some suspense and not give the whole story away here. Will their plan work? Or, will the musical become a “so bad it’s good” hit, foiling their ingenious plan?

What made this particular production of “The Producers” so great was the incredible cast. The people who are in charge of the casting process totally deserve a big round applause, as the actors were certainly able to bring the characters to life, and knocked the audience’s socks off by giving a mind-blowing performance. The seasoned members of the show, Richard Kind, Roger Bart and Gary Beach, did an especially amazing job. Kind gave his all in channeling into Max Bialystock, and apprehends all the sleaze and charisma that are appropriate and necessary for the character. Moreover, he masters all the right charms in carrying out the hilarious interactions with the fey and gay duo, Beach and Bart. It is wonderful how he is able to strike the laughs exactly right on every time. The insane chemistry between the three of them makes it hard for audience members to peel their eyes away from the stage!

Apart from the main character, Beach and Bart are two true scene-stealers. Their perfect feminine gestures, little mincing steps and over-the-top outfits brought much glee to the viewers, and were definitely audience favorites.

The only poor casting choice in this production might be Rebecca Romijn as Ulla, the beautiful but silly Swedish blonde, whose main function is probably to inject a comedic element to the show. Romijn did not do too badly of a job, but she just somehow seems inappropriate and ill-fitting for the role. The biggest issue might be due to the fact that she goes in and out of the Swedish accent, and her acting seems a bit awkward and unnatural compared to the outstanding performances of the rest of the cast. To do her justice though, Ulla is kind of a weird role to play, and Romijn might have given it her best shot.

The musical was filled with clever production numbers, but the one that made the most lasting impression was Bloom’s “I want to Be a Producer.” The number takes place against a boring and colorless accountant office facade, with Bloom sitting inside his confined cubicle looking miserable. As the song progresses, he begins to reveal his secret desire to be producer. He then imagines what an amazing life he could possibly lead upon realizing his dream. That’s when the melody and the beats of the song start to pick up, and glittery showgirls come out from his cabinet and dance on his right and left in a line. At the end of the song, Bloom finally gathers the courage to quit his job as an accountant and chase after his dreams! I venture to say that most people have been through similar experiences like this. This is such an inspiring song that has the power to motivate people to follow your heart and do the things you are truly passionate about. (But of course, only quit your job when you have a solid plan and the preparation to back it up!)

All in all, I had a joyful time watching this laugh-out-loud funny musical under a starry sky at the Hollywood Bowl.

Musical
Summer: The Donna Summer Musical Comes to the Hollywood Pantages from Nov. 5 thru 24!
1,294 views