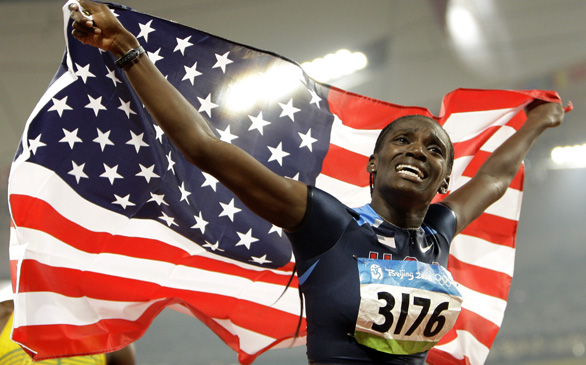 Four years ago, hurdler Dawn Harper salvaged a place on the U.S. Olympic track team by .007 seconds after lunging across the finish line at the trials.

Still, the East St. Louis (Ill.) High product remained an afterthought for a medal as she methodically advanced through the rounds in Beijing.

She entered the 100-meter hurdle finals with the sixth-best time, and it was less than promising that she entered the race shod in training partner Michelle Perry's spikes because hers were so rundown and she had no sponsor at the ready to replace them.

But heeding coach Bobby Kersee's mandate to make like a horse with blinders on, Harper was zoomed-in on only what was directly before her - oblivious both to the limitations of what she was supposed to be capable of doing and the fact that favorite Lolo Jones had smacked the second-to-last hurdle as Jones seemed headed to victory.

When Harper saw friends and coaches and family screaming for her at race's end, she thought, "Second is really good" and "third is amazing" before realizing she had won the gold medal and breaking down in tears.

"I said, 'What?!' about a million times," she recalled Tuesday as she readied for next week's attempt to become the first woman to win the event in back-to-back Games.

In 2008, she said, she was "a baby," running off a hope and a dream and blessings she still counts frequently.

"I had a breakdown praise (prayer) in my room last night; I cried and cried," she said, adding, "When I think about where I've come from ..."

Over rocky ground, she prevailed with the help of a nurturing family, a youth track program that ultimately led her to a scholarship at UCLA and in no small part because of the TLC of Olympic titan Jackie Joyner-Kersee.

When she met Harper at a young age at the community center that bore JJK's name, she left her dazzled when she told her she saw something special in her. And Joyner-Kersee has been along for much of the journey.

"Wow, I almost had a tear come there when you (asked) about Jackie and the first conversation I had with her (after the medal)," Harper said before, in fact, the tears flowed as she remembered being in post-event drug testing when a phone call came from an unknown number. "Then Jackie's just like, 'You did it!' "

She was calling from the JJK Center, where many had gathered to watch on a big screen.

"Just knowing that Jackie saw her little girl on TV ... showed her that her attention and the support that she gave me ... wasn't in vain," she said.

Since then, Harper has had moments when she's wondered who else noticed, particularly amid the celebrity status Jones has achieved after elaborate coverage of hardships in Jones' life.

Some might not even have been aware that it was Harper, not Jones, who won this year's U.S. trials, or that Harper had to come back from knee surgery in 2010 that she said a doctor told her might keep her from hurdling again.

"Hmmm, is it frustrating?" Harper said, smiling. "At one point it was, I don't want to lie and say that it wasn't. It was. But you know what? I say this and I hope that it comes across as really true:

"I know where I came from, and I'm blessed to be here. I'm at a press conference. At the Olympics. I don't care what anybody else is getting."

Meanwhile, some of that may be shifting for Harper, who said she is scheduled to appear Thursday on "Today." And it would change all the more if she were to win a second straight gold under largely different circumstances.

"There is definitely a big difference to me with the two," she said, though ultimately concluding, "I tell myself repeatedly, "You've done the 100 hurdles a million times,' so the only thing that's going to change is how I see it."

One way to see it is that Australia's Sally Pearson, the 2011 world champion who has five of this year's top six times, is the favorite.

Pearson is known for her starting burst, a point that was reinforced to Harper several times Tuesday by an Australian reporter seeking to know how Harper could counter that.

"It's not necessarily about her vulnerabilities; it's about my strengths," Harper said, noting among those is that she is "a very good finisher" and adding. "I know if I execute when that gun goes, (do) what I'm supposed to do from the first step to the last, it doesn't matter what she's done, it doesn't matter what all the other ladies have done.

But she is saying she wants all at peak performance as she sets out to "put up or shut up."

One she enters from an entirely different stance than four years ago.

Special Feature
What would sports look like with smaller or no crowds?
388 views

Special Feature
He made most of his gap years: Capehart, 85, gets degree from USC after starting in 1952
275 views