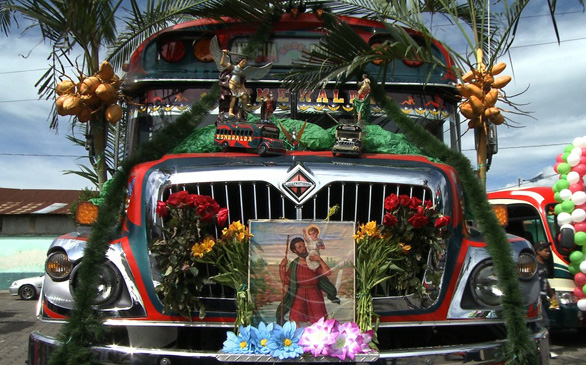 A documentary, La Camioneta shows the journey of a school bus's migration and transformation.
(Credit: Courtesy of Mark Kendall)

There has never been a more intriguing concept behind a documentary; a concept that touches people's hearts and minds, while depicting an immensely unique story. La Camioneta provides that and much more.

A curious and remarkably intelligent 29-year-old, Mark Kendall directed, produced and wrote La Camioneta, which vividly shows the long journey of one decommissioned school bus from Virginia to the Central American nation of Guatemala.

"The big inspiration for this film came through a conversation that I had with a driver that was driving a [bus] about three or four years ago," Kendall says, citing his travels through Central America.

While in Guatemala, Kendall used buses to travel from place to place. He noticed they were not from there, but from the U.S., and were often transformed into "beautiful works of art."

In this unique cinematic piece, the migration of "la camioneta" (the bus) reveals a corrupt journey through the lands of Mexico. But its also has beautiful moments, showing the process of transforming a typical American school bus into an almost new public bus to be used in a suburb near Guatemala City.

Once there, a bus importer from Quetzal City takes control of the bus, and fixes and customizes the soon-to-be transportation gem. Upon seeing it, Ermelindo - an owner of one bus already - makes an agreement to purchase la camioneta. This is where the beauty begins, as it is resplendently assembled step by step.

But La Camioneta also shows a much darker side, detailing one of Guatemala's biggest dangers. Local gangsters tend to extort every single bus driver inside and outside of the city, and Ermelindo and his drivers are no exception. They fear for their lives and the lives of their loved ones.

Sadly, in 2010, the hands of organized crime killed roughly 130 bus drivers. Additionally, to date since 2006, more than one thousand drivers and fare-collectors have had their lives terminated simply for not paying extortion money.

This is a complex and intriguing story that takes a very special type of director to tell. A man of many talents since his childhood, Kendall's resume speaks for itself. A native of Minneapolis who grew up in the suburbs of Philadelphia, he went on to graduate from Vanderbilt University in 2005 (B.A. in Anthropology) and then again in 2008 (M.A. in Latin American Studies), and from New York's School of Visual Arts (M.F.A. Social Documentary Film) in 2011. Kendall is now a current resident of Brooklyn, where he works as freelance cinematographer and filmmaker (although he studied anthropology in his college years).

"During my time in graduate school at Vanderbilt, I made a short documentary instead of writing a master's thesis project," Kendall says --he did so after petitioning the dean.

La Camioneta has already received much attention. The movie made its world premiere at this year's SXSW Film Festival in Texas, and was also an official selection at the Los Angeles Film Festival. At the Nashville Film Festival earlier in 2012, the documentary won the NAHCC Award for Best Hispanic Filmmaker and it gained a special jury mention for Best Documentary.

"I anticipate to continue to work on this film for the next year and a half," Kendall says.

Let's hope his promotion efforts pay off, as this is a documentary that truly deserves to be seen.