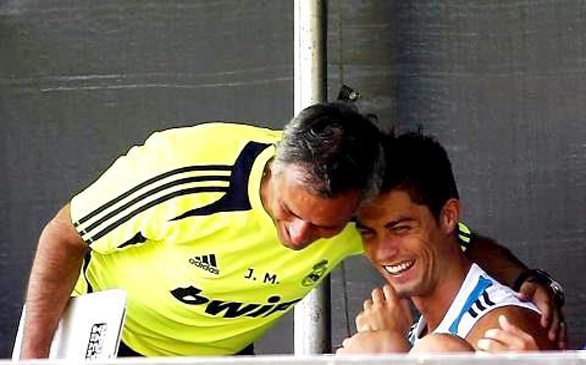 As long as José Mourinho is the head coach, Spain's Real Madrid will continue to tour the U.S. during the upcoming summers. More importantly, a game against the Los Angeles Galaxy is a sure thing.

That was the case Thursday night, as Real Madrid visited the Galaxy at The Home Depot Center before a record crowd for soccer, with 30,317 spectators. Madrid, given the major talent it sports, easily won the friendly affair 5-1.

People perhaps expected that --personally, I did. But is this good for the MLS, and a team like the Galaxy? As you may recall, the Galaxy are the defending MLS Cup champions. In 2011, the team finally won it all with English midfielder David Beckham playing an integral role offensively and as a leader.

But how would a team like the Galaxy fair in La Liga, where the likes of Madrid, Barcelona and Valencia play? Pertaining to earning a winning mark, the chances are slim for L.A. Head coach Bruce Arena knows and accepts it.

"If you look at the games Real Madrid plays in La Liga, they beat teams by bigger margins than they won tonight," he says during the postgame press conference. "We don't claim to be at the level of Real Madrid at this point in MLS, to be honest with you. If you play an exhibition tonight and you get a better result, it doesn't matter. We're not there yet."

Due to Arena's strategies as a head coach and general manager, the Galaxy organization has become, more or less, a global brand over time. And these type of friendlies against Madrid and English Premier League's Tottenham (July 24) certainly help. There is value involved: Arena acknowledges that these matches are for the public.

"This is an exhibition; there is obvious value for both teams, and it's a fabulous experience for our fans to see one of the great teams in the world and some of the great players," he says.

Mourinho, who considers himself "The Special One," spoke to Arena the night before the match. They talked about soccer, obviously, and the purpose of each coach's line up for the contest. In each half, both coaches showcased two different line ups - a different set of 11 players.

With this U.S. tour of friendly matches, Madrid's preparing for its opener on August 18; Mourinho called the friendly against the Galaxy a practice for both squads. Yes, it was a training session, but the fans loved it.

"Galaxy is a kind of team that is not too worried about losing 4-1 or losing 1-0," the Portuguese icon points out. "They're just worried about playing, playing well. Play their game, let us play, and in this moment of the season, I think it's the most important thing for us."

Ronaldo did not net a goal, but managed to provide a load of individual moves on the pitch, including a thrilling bicycle kick inside the box that left the attendees wanting much more.

"We made a good impression on the enthusiastic fans who came to the game. [The] Galaxy wanted to play and to do well, and they were not worried about the result. I’m thankful for that," Mourinho says.

It seems as if Mourinho aims to travel to California next year yet again, and book a game against the Galaxy. He loves it. Los Angeles does not mind. And the fans, well, they will show up.