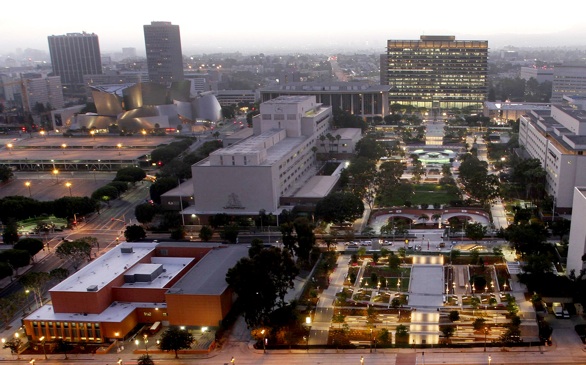 A project that has been several years in the making, Civic Center's impressive new Grand Park kicked off the first leg of its three-phase opening on July 26.

Once all phases open to the public, this urban oasis will span across four blocks and feature an unheard of 12 acres of recreational space smack-dab in the heart of Downtown Los Angeles. Today Angelenos can access the northwest end of the park, and come this fall they will able to access the entire property.

Some of the park's amenities will include a renovated Arthur J. Will Memorial Fountain, wading pool, performance lawn and stage, Starbucks and plenty of bright pink benches, chairs and tables to provide stylish seating options for its patrons.

Though hopes are high that Grand Park will be a greater success than the city's previous failed urban recreational project Pershing Square, numerous concerns arise as to whether the park's vision is actually a good one. For starters, the park is not quite the urban oasis that many Los Angeles natives had envisioned ––Hill Street and Broadway dice Grand Park into three separate city blocks. Also, many people disapprove of the park's lack of actual greenery and overabundance of cement.

Despite these criticisms, the park shows an effort on part of the city to reintegrate a sense of community into the Downtown neighborhood. Grand Park holds a lot of promise; hopefully it will prove its critics wrong and provide residents of Downtown L.A. a much-needed recreational space and sanctuary.