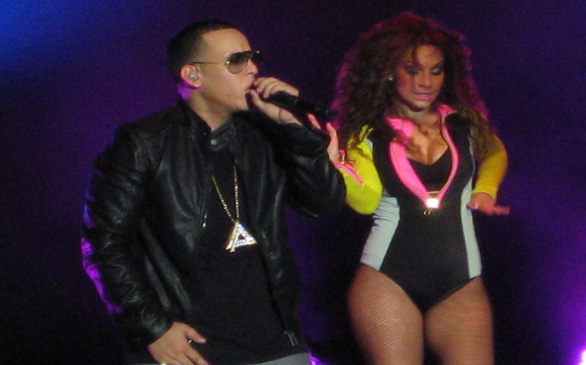 Daddy Yankee is at another level. The Puerto Rican reggaeton performing artist proved that Sunday night at The Greek Theatre in Los Angeles in what turned out to be a fabulous experience for those in attendance.

On a cool summer night, nothing less could have been expected in the open-air venue. Near mountains and trees, and with an excitingly loud audience, the 70-minute show delivered full satisfaction, beginning with "Lovumba."

DY's "Lovumba" carries an upbeat tempo, which is highlighted with its merengue sound and rhythm. But the track also has romantic lyrics, detailing a love and rumba story. "Lovumba," part of the upcoming album Prestige (releasing September 11), sports a fusion of mambo, soca and dance beats - an element this 35-year-old singer, born as Ramón Ayala, is known for.

"Pose" (Vogue) followed in spectacular fashion. The Latin Grammy Award-winning star once admitted that the inspiration for this particular track arrived when he noticed that various fans (especially the women) with cameras were always attempting to strike a perfect pose. "Pose" is an electro song blending pop, hip hop and Latin dance rhythms.

The night was just getting started at that point before DY sang the infectious "Pasarela" (Runway) and one of his most popular pieces, "Lo Que Paso Paso" (What Happened, Happened). Both feature Latin dance and merengue-like rhythms.

"Descontrol" (Chaos) and "Ven Conmigo" (Come With Me) arrived at the concert's climax, which saw DY humbly talking to his L.A. fan base on several occasions. DY, who was accompanied by six sexy back-up dancers, did not leave out "Gasolina" (Gasoline) and "Rompe" (Break It Down). The two already are classics in his repertoire, and both enormously helped DY's career blossom even more when he hit the mainstream market.

DY, dressed in gray fitted-jeans, a black t-shirt, black leather jacket, black kicks, dark shades and a long diamond necklace, has been an integral part of reggaeton since its introduction to the public in the early 1990s. Although he originally intended to be a professional baseball player, after suffering an aggravating leg injury, he stopped playing the sport and gradually focused on music.

Arguably the most important figure in the genre, DY then became involved in an underground rap movement (in its early stages) in his native Puerto Rico. Now known as reggaeton, the unique style has musically infected people universally - and this is particularly the case throughout Latin America.

DY, knicknamed "El Cangri," showed L.A. why he has been atop of the genre for many years. Certainly a pioneer of reggaeton, DY now has reached another plateau that's led him to differentiate his career from others.