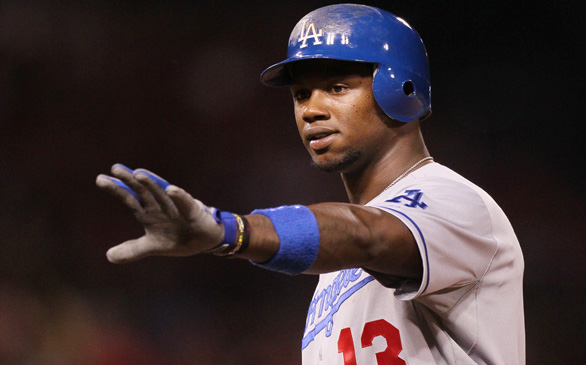 Not too long ago, Los Angeles Dodgers infielder Hanley Ramírez was considered one of the best baseball players and was a National League MVP candidate.

"He is a great baseball player, and he has shown that over the years," infielder Luis Cruz says of Ramírez.

It is no question that the offensive production has diminished in the last couple of years, but Ramírez's approach to the game he loves is the right path to embark on. Ramírez, at 28 years of age, sports a pleasant energy within - an element of excitement that is contagious.

Despite any criticism he has endured, Ramírez has managed to play through the struggles with his past team, the Miami Marlins. And now, he has been given a new scenery, a fresh start, a change of pace, and a change of team environment.

Ramírez joins 2011's NL MVP runner-up Matt Kemp, who should have been awarded the honors over Brewer Ryan Braun. Kemp, a baseball freak (he is just too darn good to describe), provides protection and leadership for Ramírez, and Andre Ethier adds depth to one of babseball's most solid offensive trios.

"We knew what we were getting when we got Hanley. He's a very special player, someone who can definitely change a game and is a difference maker, so we're pretty fortunate to have him come over here for the rest of the season and two more years," a pleased Ethier tells reporters after the Dodgers beat the Chicago Cubs, 7-6, Sunday afternoon. "It adds another really exciting player to our lineup, and his defense is pretty good out there too, the way he's able to man both third base and shortstop.''

The win over the visiting Cubs came as Ramírez notched a walk-off RBI single, plating Kemp for the game-winning run.

"I like these moments. That's why I'm here...to help this team win ballgames,'' Ramírez says. ''I'm not trying to do too much...and that's the key for me."

Ramírez finished 1-for-3 with an RBI, but he also walked twice and scored once.

With the victory, the Dodgers gained a three-game sweep of the Cubs, which came after L.A. was swept by the surging Arizona Diamondbacks last week.

Dodger manager Don Mattingly will take wins any day, regardless of how they arrive.

"[A win is a win]. Yes, sir," Mattingly says. "At the end of the year, you are going to need 'x' amount, and this counts on the good side. As we get down the stretch, there's going to be a lot of fun baseball ... You take a win anyway you can get it --anyhow, against anybody."

And this is where Ramírez, a three-time All-Star and NL batting champion in 2009, may or may not shine, but his approach to the sport makes his chances of solidifying the Dodgers offense more possible.