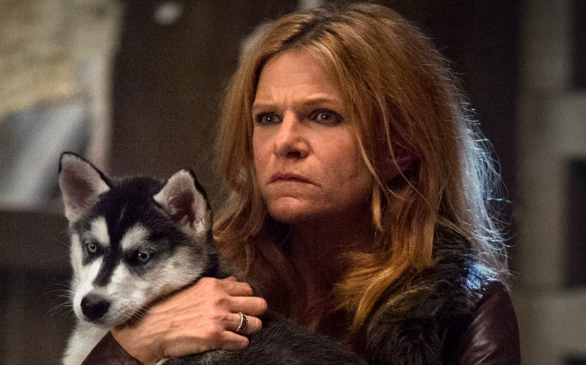 With only three more episodes until the season finale, the plot is thickening as the different story lines begin to intertwine. In this week’s episode Eric and Bill’s bromance is over, Sookie is a damsel in distress once again, and power couples Luna and Sam and Arlene and Terry take charge to protect their families.

After the plan to blow up Tru Blood factories goes underway (thanks a lot, Bill) Eric has had it with the religious freaks at the Authority, and he’s trying to break out with the help of the techie vamp. They need Bill’s help to get Salome’s blood, and even though it seems like he’s gone to the dark side Eric is convinced that Bill’s love for Sookie makes him a mainstreamer at heart. But for once Eric is too trusting. After Salome tries to convince Bill that they are the “chosen ones,” she and Bill get it on. Things get kinky when Salome becomes Sookie in Bill’s vision and he drinks her blood. Suddenly Sookie turns into blood-covered Lilith then back into Salome. It seems that Bill is a bit too high on vampire blood, but he sees it as confirmation that he really is the chosen one. Instead of helping Eric escape, Bill rats him out and Salome catches Eric just before he and techie vamp escape. What ever happened to bros before hos, Bill?

Now that Terry and Patrick must kill each other to break the curse, Arlene is convinced that Patrick must die, but Terry isn’t ready to kill his former platoon leader. In order to get to Terry, Patrick holds Arlene hostage at Merlotte’s. But Arlene goes from helpless hostage to Terry’s defender, and she stabs Patrick with a chopstick. The point of no return has come and Terry has a gun to Patrick’s head with Arlene begging him to shoot. But it isn’t Arlene or Patrick’s pleading that makes Terry decide, but the ghost of the woman he killed who tells him, “Do what is right.” Apparently the right thing to do is to kill Patrick, and Terry shoots him in the head. Now that “blood has been paid with blood,” the Ifrit claims Patrick’s body and Terry is free at last. To be honest, it’s kind of a relief that this plot line has ended (if that really is the end...).

Sookie is still trying to figure out what happened to her parents, but in the meantime she is freaked out by the vampire spirit that is in her room and she calls Lafayette for help. Sassy Laffy is back with his best one-liners (“I’m not Whoopi Goldberg in Ghost, although I’m way prettier”) and he is able to contact Sookie’s Gran who reveals that what Sookie is looking for is under the bed. They find Gran’s box of memorabilia that contains, aside from Jason’s framed report card of his only B, a newspaper clipping of the accident, reporting that former Sheriff Dearborn was the one who found the bodies. In a search for answers Sookie confronts Dearborn, but instead of getting answers she gets whacked in the head with a frying pan by Dearborn’s mistress.

The Dragon and Her Pigs

Andy and Jason are searching for the supe-hating group, now known as Obama because of their masks, and this time it’s personal now that Hoyt has gone missing. They decide that, like the KKK, the hate group must have a leader, or “dragon,” who needs to be taken down. Freaked out by Luna’s shifting mishap, Andy refuses to let her and Sam help even though they have a lead: the Obama house smelled like “pig shit.” The two shifters take things into their own hands and become flies on the wall (literally) to find out what Andy and Jason are up to. Meanwhile, Andy and Jason find a video on the hate group’s website of the haters “making soup out of supes.” Even more disturbing is who is in the video: Bud Dearborn, who now has Sookie and Hoyt on his pig farm. Though Dearborn is thought to be the dragon, it turns out the true dragon is his crazy mistress whose husband left her for a shifter, leaving her bitter and homicidal. Before she and Dearborn can feed unconscious Sookie and Hoyt to their pigs (a very strange way to kill someone, by the way) a pig-shifted Sam comes to the rescue once again and takes down the haters completely butt-naked. Luna gets her own angry hands on the dragon and beats the crap out of her, also completely butt-naked.

Poor Alcide has been kicked out of the pack and forced to move back with his gambling father, but it might be better that Alcide is a lone wolf because his pack is in trouble. Russell pays them a visit with his new boy-toy Steve Newlin. Russell describes the pack as his pets, and this is apparent when he feeds them his blood like a master would his dogs. Martha is in a corner with little wolf pup Emma, and she refuses to drink Russell’s blood. “Smarter the creature, the more discipline it needs,” Russell tells Steve before taking Emma and offering her to Steve as his new pet. Martha desperately asks the pack master to help, but when the he asks Russell for Emma the old vampire isn’t pleased. He grabs him by the neck and calls him a silly dog in an accent that is definitely not Southern...why the accent change?

Werewolves aren’t the only ones having issues. Back at Fangtasia Pam and Tara realize that with the Tru Blood factories disappearing, their own stock of Tru Blood will soon be depleted. Pam decides that when the time comes they will just have to discreetly feed on humans. But when a new face shows up at Fangtasia sitting on Eric’s throne, discreetness is no longer necessary. The newcomer is Eric’s replacement as the sheriff of Area 5, and he declares that it is no longer illegal to feed on humans. Fangtasia is in for a bloodbath.

Bill is drunk on power (and Lilith’s blood)
Guns galore for Sookie, Laffayette and Alcide
Eric potentially faces the true death (again)
Luna gets caged
Jason turns into a vamp?!?!

Watch a preview of the episodes to come here.