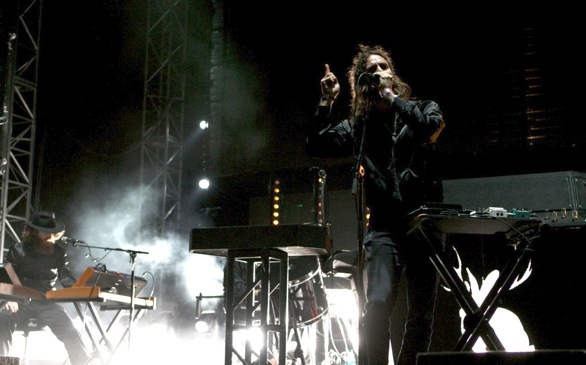 Miike Snow's performance was too mellow for this particular festival.
(Credit: David Tobin)

The electronic dance music festival that originated in L.A. came back for the fifth time this year and brought with it a new resurgence in what an event should be. From the first beat dropped to the last button pressed, it brought together a group of people that all just wanted to have a good time, so the energy was right and the organization was impressively smooth.

The crowd was littered with girls in costumes that consisted of next-to-nothing, so add that to the crazy mix of people and music fans of all walks of life, and you have a festival that was memorable, enjoyable and fortunately, without incident (for the most part).

The music sets were top notch and the performances went on without a hitch, except for night two when one of the top billed acts, NERO, took the stage. In the middle of their set, the power went out. Then again. And again and again, until they had to end their set and just leave the venue. It seemed that the feed from their mixer to the mainline was shorting out. The crowd was pretty upset and let down, but in the end they understood that things like this happen.

However, despite NERO’s disappointing set, the two-day dance fest had a number of highlights, including Fake Blood and his very tight set in the middle of a tree-filled dancefloor on the Harder stage, as well as Datsik’s performance at that spot on night two. Over on the Discoteque stage, it was a clear win for Chromeo’s DJ set, with A-Trak spinning a memorable set there as well.

Another bright, but ill-fitting act was Bootsy Collins. He is hands-down one of the best showmen out there, but he was simply put in front of the wrong crowd. It’s just a huge slap in the face to a legend when he has to beg the audience to pay attention to his set. Those who knew who he was felt bad for the guy and his half-filled crowd.

On the main stage, the Bloody Beatroots were the most solid of both nights. The energy and song selection set the crowd off, and really made all the other acts step up their game. Miike Snow also had a great sounding set, but was by all accounts boring, and mellowed the crowd down rather than hyping them up.

Which leads to the big act: Skrillex. His set was hard and fast, and probably the one thing everyone came out for. His sound was on fire and was accompanied by an impressive light show, but I have to say – and I know I’m going to get hell for this – his set started to sound the same after a while. There was a lack of diversity and range. A lot of the songs blended in together and by the time it was over, it just didn’t feel like an appropriate finale for a two-day event; it just seemed like someone finishing up their song and leaving the stage.

In the end, HARD provided an excellent collection of musical acts that are thriving in the underground and are beginning to spill out into mainstream. Hopefully next year will be just as good --or maybe even HARD-er.