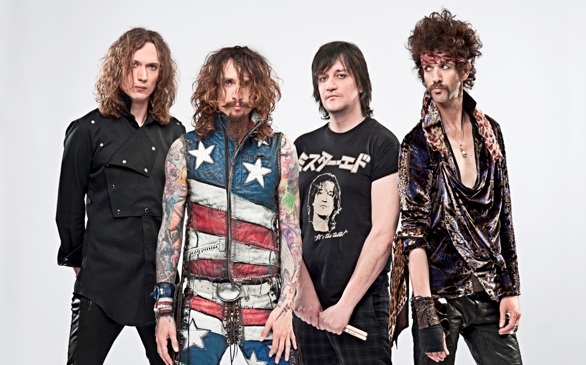 Seven years after they split up in a mess of rehab and band chaos, the eccentric rock/metal outfit is back with a vengeance. The Darkness’ new album, Hot Cakes, is as raw and badass as their debut.

With Justin Hawkins no longer on the drug binge, the band has matured into the arena rockers they were meant to be. Don’t worry, they haven’t gone all serious or given up the spandex suits and capes though –they are simply sharper and tighter.

Their first single, “Everybody Have A Good Time,” resurrects the essence of their debut album Permission to Land. It is ballsy; it is outrageous and a whole lot of fun! It features the band’s trademark 1970s rock sound accompanied by the falsetto and choruses reminiscent of rock icons, Queen.

“Keep Me Hangin’ On” reflects their experimental side with different genres. I won’t say exactly where, but you can definitely expect to hear some Latin beats along the way.

The album follows up 2005’s One Way Ticket to Hell...and Back, and features the original lineup of singer Justin Hawkins, guitarist Dan Hawkins, bassist Frankie Poullain and drummer Ed Graham. Hot Cakes was produced by the band along with Nick Brine and mixed by Bob Ezrin.

“On the second one we second guessed what our audience wanted, and we guessed wrong; they wanted the weirdness,” admits singer Justin Hawkins. “Writing-wise we weren’t honed, mostly because of time constraints and pressure.”

With all that out of the way, get ready to get your mind blown because this new work also includes a cover of Radiohead’s “Street Spirit (Fade Out)” as well as the standout single “Nothing’s Gonna Stop Us.”

With the guitar wizardry at its best, the new record is a testament to the band’s still-burning passion, and shows that they are learning to embrace both the good and the bad that comes with being rockstars.