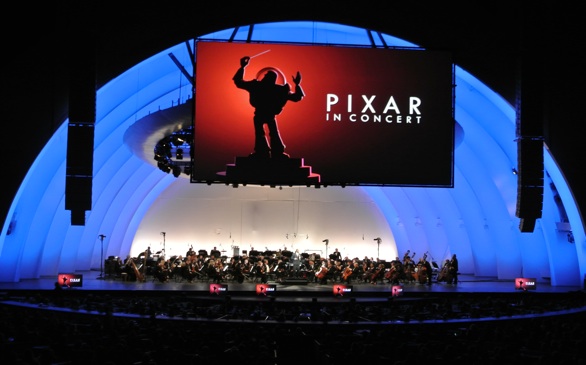 This special concert presentation was a night to remember
(Credit: Nicki Spencer)

Often in watching movies, people are so focused on the story, the images, the characters and the dialogue that they forget to really pay attention to the music. However, this past weekend the Hollywood Bowl hosted a show titled “Pixar In Concert,” which allowed the audience to watch clips from each of Pixar’s 13 feature-length films as the Hollywood Bowl orchestra performed music from the films’ original scores. The purpose of the concert was to give the music in these films the true acknowledgement that they deserve by silencing the dialogue. Thus, each of the films were retold using only music and videos, which allowed the audience the unique opportunity to embrace the incredible scores created by Randy Newman, Thomas Newman, Michael Giacchino and Patrick Doyle.

It is not easy to condense the best moments from a Pixar film into a 5 to 10 minute videos, but the editors did a good job of using the right clips to highlight the major themes and stories. The concert began with the first-ever feature-length film that Pixar created, Toy Story, which was followed by A Bug’s Life, Toy Story 2, Finding Nemo, Cars, Ratatouille, WALL-E, Up, The Incredibles, Cars 2, Monsters, Inc., Brave and Toy Story 3, which ended the night.

The audience was engaged throughout the entire show. There was laughter whenever the Toy Story aliens saw “The Claw,” tears when Nemo’s mom dies, and “oohs” and “aahs” when the little rat from Ratatouille gazes upon the twinkling lights of Paris while resting in an oven mitt. Without a doubt, one of the main highlights of the night was when the sequence from the movie Up was performed. The reason why this sequence was so successful for “Pixar In Concert” was because most of the video clip was from a non-dialogue montage in the original film. The four-minute montage tells the story of an old man’s loving relationship with his late wife, and his guilt for never taking her on the grand adventure she always dreamed about taking. It is four minutes of cinema magic that was originally intended for music, so hearing the Hollywood Bowl Orchestra perform it in synchronization with those images was tremendously powerful, and left most people with watery eyes.

Thomas Wilkins, the Hollywood Bowl Orchestra conductor, served as the host for the concert; however, the Friday night show was co-hosted by John Lasseter, the Pixar and Disney Animation creative chief. Amongst his comments and speeches, Lasseter mentioned the main qualities needed to make a good film include an excellent story, relatable characters and a believable world in which characters and the story can exist. In viewing “Pixar In Concert,” it was easy to see how the Pixar films have embraced these foundations in order to make memorable animated features. Before each song, Wilkins or Lasseter would comment on the inspiration behind the music, such as the influence that 1940s jazz music had in Randy Newman’s creation of the Monsters, Inc. score. Wilkins also told the audience that in order to accurately perform the Pixar musical scores, they had to add some non-traditional instruments in their performance such as a surf guitar and a bagpipe. This commentary made it even easier to understand how each composer designed the musical scores to amplify the atmosphere of the films.

During moments when music was not being performed, the screen showed the silhouette of Buzz Lightyear holding a baton as if he were about to conduct the entire Hollywood Bowl Orchestra on the stage. It was the perfect image to represent the combination of music, imagery and the creativity of Pixar. Not to mention being at the Hollywood Bowl in the open air with tasty food brought from home just added to the magic of the event even more.

On walking out of the Hollywood Bowl, it was easy to overhear the array of excited and positive comments about the show. However, one comment that stood out from the rest came from a 20-something girl who said, “I feel like I just relived my entire childhood.” Thus, with the live music performed by the fantastic Hollywood Bowl Orchestra, the vibrant colors and the adored characters shown on the screen, “Pixar In Concert” was not just a night of watching video clips, but rather a night of watching beloved moments that everyone will remember “to infinity and beyond.”