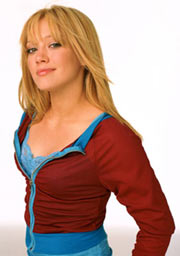 Does Hilary Duff, the 16-year-old who just bought a $5 million mansion in the Hollywood Hills, believe in happily ever after?

"Oh, I would like to. I’m only 16, so I don’t really know. I don’t know if I really believe in that kind of stuff," says the singer and actress. "I’m not searching. I work a lot and I don’t have time to deal with that kind of thing — maybe someday."

Erudite words from someone who seems contracted to pratfall at least three times in her films and twice in the preview for her newest release, A Cinderella Story. A high school take on the classic fairy tale, Duff plays the shy Sam, who literally falls head over heels for the dreamy Austin (Chad Michael Murray) against the wishes of her hilariously evil stepmother, Fiona (Jennifer Coolidge) and jealous stepsisters.

"It is so competitive. There are so many great new actors and projects coming out every day. I don’t know if I think about it as being competitive, though, like ‘I better get this!’ or ‘If I turn this down, so and so is going to get it!’ I have a great team around me that helps me," Duff says. "But I do have a fun time. Even though I do work my butt off, I try not to make it too competitive."

Not that Lindsay Lohan will be doing a multi-city, sold out tour this summer. In her quest to become the Princess of All Media, Duff will be singing hits off her album Metamorphosis and even sharing the stage with actress and sister Haylie, currently starring in the movie Napoleon Dynamite.

"They’re such different feelings, you know?" Duff says about the experience of acting and singing. "When I’m on tour, I’m in a new city every single night. The energy, the crowds, the kids, the screaming, them knowing every single word of my music, and being onstage … it’s so energetic. It’s such a big payoff.

The obvious amalgamation of these loves — a musical, live action movie or performing on Broadway — is something the 5-foot-1-inch star of "Lizzie McGuire" doesn’t feel comfortable doing yet.

"I don’t know if I’m that big. You have to be very big to do a play. I’m not saying never, [but] there are so many things I want to accomplish. [I want] to keep challenging myself. I have a movie that I just did called Raise Your Voice with Rita Wilson, John Corbett and Rebecca DeMornay, where I got to sing and perform a little bit. But it was different than being on stage."

Yet making lasting friendships, which Duff seems to do so effortlessly on film and TV, isn’t so simple in the land of reality.

"I feel so bad sometimes, when my friends are like, ‘Let’s go to the movies!’ I’m like, ‘It’s Saturday, it’s 7:30 — there are so many people at the movies right now!’ Or going to our favorite restaurant … we can’t just go to the mall," Duff says.

What about wearing sunglasses?

"Not really. Basically, you can’t hide. I’ve tried everything. My hair really gives me away; I’ll put it all up in a baseball cap and pull it down low. I try not to wear sunglasses, ’cause if you wear sunglasses — I mean, if you saw someone walk in with sunglasses and a hat pulled over their head, wouldn’t you wonder, ‘Who’s hiding under there?’"

But life is good for Duff, even if it’s not always easy — though never anything like a Cinderella story. "I never really struggled at home with a bad family life, nothing like that," Duff admits. "Before I got my TV show ‘Lizzie McGuire,’ it was a struggle. I went on hundreds of auditions and wasn’t getting any callbacks, but my mom prepared us well for rejection — teaching us not to take it too seriously," she says. "But I feel very lucky and very blessed."

Even without the intrusion of a fairy godmother.