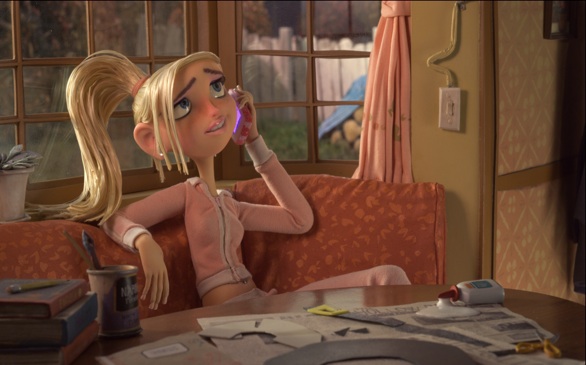 ParaNorman ushers in the Halloween season for those who have been waiting all year for a little spooky goodness.

From LAIKA, the stop-motion makers of Coraline, comes the tale of a not-so-ordinary 11-year-old kid, Norman (voiced by Kodi Smit-McPhee), who happens to see ghosts in a town where that little ability is the cause of ridicule –even from his family. When the ghost of his uncle entrusts Norman with the task of reading a story to the town witch at her gravesite before she rises, it seems that things keep getting in the way of completing the mission, including the rise of some very ancient zombies.

Up in the Air’s Anna Kendrick voices Courtney, Norman’s older sister, a blonde cheerleader who aids her brother and friends in stopping the witch’s curse that threatens her town. Known for her work in a range of genres, Kendrick enthusiastically joined this animated project.

“I always wanted to do one, but I wasn’t really sure how one went about asking to be in an animated film. I felt really lucky that this special one fell right onto my lap, and I just jumped at it.”

ParaNorman is a throwback to classic kid films: the characters are a mix of plucky side-kick best friends, the reformed bully, and the embarrassed older siblings trying to keep their cool. This homage to films like The Goonies or Honey, I Shrunk the Kids appealed to Kendrick: “When I was reading the script, there is a great moment where I realized it’s just going to be all these kids figuring it out. It’s a kids adventure movie –that was my favorite kind of thing growing up. Even when I was watching Harry Potter and the Order of the Phoenix, and they’re running through the department of mysteries at the end, I had this kind of regression moment where my inner child was so happy, and I realized it was because I just loved kids coming together to save the day.”

The beautiful stop-motion animation gives the film its very eerie feel, and brings together the idea of the movie being “John Carpenter meets John Hughes.” (The score is very reminiscent of Carpenter’s ‘80s horror movies).

ParaNorman also boasts an incredible set. The adventures the characters go on take them from their town to the woods and back. Every detailed set, three dozen to be exact, was painstakingly built by an enormous team of 18 carpenters, 18 model builders, six riggers, 12 scenic painters, 11 greens artists and 10 set dressers.

Kendrick had the unique pleasure of actually getting to see the sets, which many of her co-stars did not.

“I got to go a couple days after they finished filming. I [felt like I] was the 50-foot woman, and there was still enough there that was beautiful and magical to see.”

Its visual splendor aside, ParaNorman is a movie that addresses issues that really affect many kids growing up, like fitting in and bullying.

“This is a magical take on the guy who’s the underdog, who no one believes in, [who ends up being] the guy that everybody has to turn to for help,” explains Kendrick. “These kind of movies … take something bad … and channel it into something beautiful and entertaining, but that also will resonate with kids who are going through the same thing.”