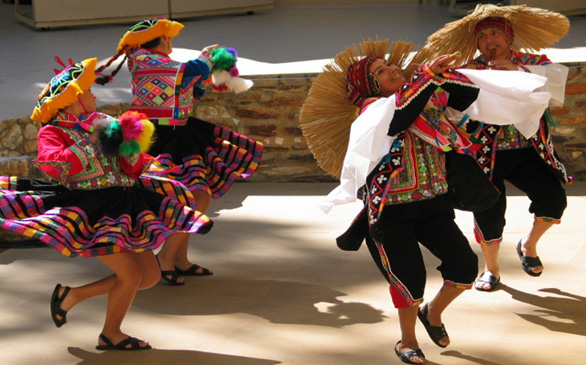 Former Argentinean musician Guillermo Bordarampé loves music, so much so that after his eight-year stint with the band Arco Iris, he had a vision that he was determined to make a reality --even though he had already retired as a musician himself.

“Arco Iris was a rock group back in the 1970s,” Bordarampé says. “We were like a South American Pink Floyd. We had our moment of glory in Argentina.”

The Buenos Aires-born and raised Bordarampé, who plays guitar, mandolin and bass, is the current director and president of the renowned performance arts company, INCA, the Peruvian Ensemble. INCA is a non-profit organization that researches, preserves and presents Peru’s rich multi-cultural heritage of ethnic and folkloric music, songs, dance and traditions, among other things.

“I went back to the roots of the South American ethnic music, and that’s when I decided to establish INCA, the Peruvian Ensemble,” Bordarampé says. “I knew a couple of dancers, two twin sisters called Bracamonte, and the percussionst Tito Hugarte. Together we established the group and started performing.”

Bordarampé founded INCA in 1981, and they are now celebrating their 30th anniversary with a unique performance, taking place Aug. 18 at the Ford Amphitheatre, titled “Tangos & Huaynos: Music & Dances of Argentina & Peru.”

“The people are going to be in for a great evening of music, where they can really taste the contrast between the Argentinean urban tango and the Peruvian music and dance,” Bordarampé shares.

It will feature artistic and cultural performances based out of Peru and Argentina, while attaching music and dance traditions from the Incas and the Hispanic Criollos in Peru with the fiery passion of the Argentinean tango.

“They are very uplifting music and dances, and they will really lift the spirits,” Bordarampé says.

Since the 1980s, INCA has embarked on a heavy load of touring and playing throughout the western states. The aid of grants INCA has attained provided a means to visit such locations as the Hollywood Bowl, El Paso's El Chamizal Ampitheater, Santa Fe's Greer Garson Theater and Colorado State University, among others. Additionally, they have produced numerous recordings, guiding the way to maintaining its ethnic musical background.

Over the years, INCA has obtained support from several different entities, a clear piece of evidence showing that INCA is expected to not only keep performing, but also exponentially grow over time. The Cultural Affairs Department of the city of Los Angeles, the California Arts Council, the L.A. County Arts Commission and many businesses, corporations and individuals in the Southern California area have displayed efforts to help INCA.

“With that help we do a lot of free concerts at libraries for children and families,” Bordarampé says.

For more information on INCA, the Peruvian Ensemble, click here.