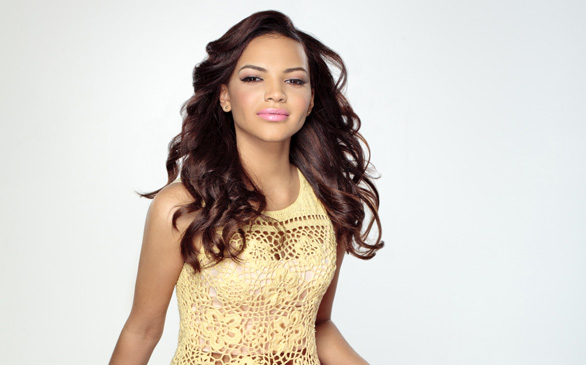 Of Dominican descent, the young Leslie Grace is excited to perform in Los Angeles.
(Credit: Courtesy of Top Stop Music)

Leslie Grace is as young, beautiful, talented, charismatic and joyful as singers come --but what really makes her stand out is the humility she naturally carries, especially considering her growing prominence in the Latin music scene.

Born in New York, the 17-year-old Dominican-American singing gem is on the verge of making her mark on the music industry with her God-given natural gift, something that she discoverd at a very young age, as she began uttering song words when she was only 2 years old.

“There was always music in my home; my family is big on music,” an articulate Grace says. “Being Dominican, it was usually merengue, bachata or salsa playing in the house. I grew up listening to music of La India, Marc Anthony and Juan Luis Guerra."

Grace has had musical aspirations for as long as she can remember; at 6 years of age she told her mother she would like to be a singer when she grew up. Since then, she has been singing, starting out in her local church and now progressing into making her talent into her career.

The Florida resident has now released her first single, “Will U Still Love Me Tomorrow,” off her debut album due in early 2013. Grace puts her vocal abilities on full display on this track, adding bachata rhythms to the Shirelles’ classic romantic tune.

“That is one of my favorite songs from that era,” Grace shares, recalling when her and one of her sisters would do karaoke to it. “…I wanted to give it a bachata twist, and I thought it was perfect because it is from my roots … It was amazing to put it together.”

By adding a Latin flavor to the song, Grace truly makes the cover her own piece of music. With lyrics in both Spanish and English, the melody is sure to blow up the charts internationally.

“I always loved both worlds, and now it is like a dream to portray it in my own music,” says the singer.

Grace’s performance of this classic is noteworthy for a number of reasons. Firstly, Grace’s soulful vocals are captivating. Secondly, as the tune begins, it plays a classic tempo reminiscent of the original oldie; once it progresses, the exquisite sound of a traditional bachata finds way to your ears, and gradually reaches your mind, heart and soul. Thirdly and most importantly, Grace’s delightful voice is a perfect match for the track’s rhythm, with her vocals adding the perfect complement to the romantic bachata sounds. Lastly, Grace simply conquers the bolero-son styled bachata when she blends her R&B singing style – sounding heavenly.

Grammy Award-wining Latin music producer Sergio George produced the song, and with his expertise and Grace's natural ability, the collaboration has cultivated an instant hit that is already penetrating the music waves.

“She is a performer with great charisma and one of the most promising voices in the Latin genre,” George told dominicantoday.com.

“At the H2O show, you’re going to see a little bit of foreshadowing of what you can expect for the album,” Grace says.

“I am very thankful that everything is going so well,” she says.