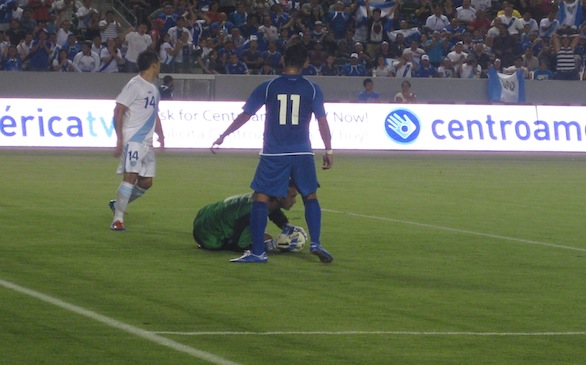 The El Salvador national soccer team managed to score an impressive goal netted by forward Nelson Bonilla, allowing them a narrow victory against Guatemala, 1-0, in a CONCACAF friendly Saturday night at The Home Depot Center before 18,879 fans.

Despite the absence of midfielder Marco Pappa (Chicago Fire), Guatemala controlled possession of the ball for both halves. The team could not find the back of the net, however; former Los Angeles Galaxy striker Carlos Ruiz saw several scoring opportunities, but did not convert.

"We lost, and it is difficult for us," Ruiz says. "We played good, and we created a lot of opportunities to score and we missed a lot. But this was a friendly game, and we are going to start to play better."

In the second minute, Guatemala's Leon Manuel directed a header towards the Salvoderean goalkeeper, but the shot went wide and hide; off of the set piece from the right flank, this would have been a great chance for the Guatemalans to score. Three minutes after, Jonathan Lopez fired a low-placed potent right-footed kick, but Benji Villalobos made the stop.

In the 13th and 21st minute, Guatemala nearly scored yet again. Forward Mario Luis Rodriguez out-ran the Salvoderean defense and attempted a chip shot over Villalobos, but he made an impressive save. Then, Ruiz processed another chip over the ES defense, including the keeper, but the ball landed on the left post and bounced back into the box before the defense executed a clearance.

The game-winning kick came in the 26th minute, when Bonilla frantically out-dribbled and out-played the Guatemalan back line and fired a 35-yard right-footed shot. Curling in the air in fine fashion, the ball landed in the upper right corner of the net past goalkeeper Ricardo Jerez. The goal gave ES the lead into halftime, and it ended up being enough to secure a victory.

The second half saw more of the same, where Guatemala dominated but could not find the net. Ruiz held various chances to seal a tie and perhaps a go-ahead goal, but he just did not capitalize --it was not his day at all. With a couple of controversial calls from the officiating crew in ES' way, Guatemala was left unhappy.

Defender Steven Purdy, who plays for the Portland Timbers, was an essential player in the match. He practically man-handled Ruiz and the other Guatemalan offensive attackers.

"It was a great game for us with great results," Purdy says. "...[Ruiz] is a tricky player. You always have to be very concentrated with him and his movements because in any second, he can be behind you."

Both Guatemala and El Salvador are currently competing in friendly contests, as they prepare for officialy CONCACAF qualifying soccer matches beginning in September.