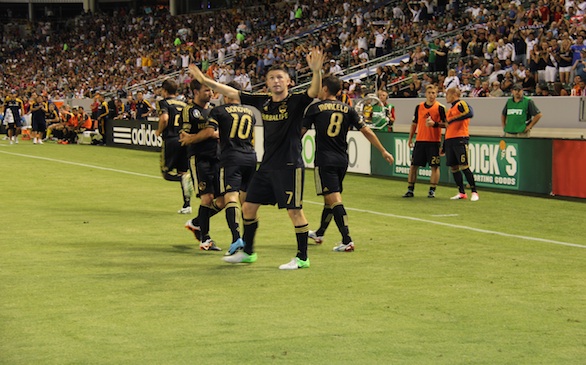 A career high four assists by Landon Donovan, a first half goal from Irish striker Robbie Keane, two scores from Brazilian midfielder Juninho and another from defender Omar Gonzalez in the second half led the Los Angeles Galaxy in their 4-0 SuperClásico victory over Chivas USA at The Home Depot Center in Carson before 17,601 fans.

“Landon [Donovan] really was focused on playing well tonight, and when he wants, he is as good as any player in this league. And I felt he and Robbie [Keane], once again, were in great form,” Galaxy head coach Bruce Arena says.

The win improved the surging Galaxy to 11-11-3 with 36 points. Meanwhile, Chivas USA experienced a drop, moving to 7-9-5 for the year to go along with their 26 points.

It was really never a tale of two halves for the visiting Galaxy, who managed to control the tempo of the match in both halves by attacking viciously and rapidly. Their one-two offensive punch of Donovan and Keane led the charge while formulating imbalances in the Chivas USA defense.

Throughout the first 45 minutes, Chivas USA found some clear holes, but could not gather a clear path to capture momentum in their style of play. This resulted in the Galaxy gaining confidence at a gradual pace. Keane netted his 10th goal of the season, and gave L.A. a 1-0 edge in the 27th minute.

After trapping a pass, Keane delivered the ball to a sprinting Donovan. He then outran Chivas USA goalkeeper Dan Kennedy and re-connected with Keane, who secured a left-footed shot into the back of the net.

“We were outclassed; we were lucky we got out of the game with a 4-0 score," Kennedy says. "I am at a bit of a loss for words. They just have a lot of class on their team. If you give them as many opportunities as we gave them tonight, then they are going to put away some goals, and that is exactly what happened. The result was not much different from the last time we played them, and that is what disappoints me the most. We learn from this and move on.”

Chivas USA really did not reach the Galaxy territory until the 40th minute, when Miller Bolanos found himself inside the box for a weak shot that was stopped by goalkeeper Josh Saunders.

The second half was a different story for both squads, who met for a third time this year. L.A. notched three goals, two from Juninho (64’, 74’) and one from Gonzalez.

The 64th minute saw Brazilian midfielder Juninho scoring a beauty – arguably one of the most remarkable goals of the year for the Galaxy. Off a pass from the left side from Donovan, Juninho secured the ball cleanly before making a decision. Juninho then fired a right-footed shot from outside the box and into the back of the net past Kennedy.

Juninho contributed another score in the 74th minute after Donovan sent a cross from the left side, and he one-timed a right-footed kick that led the leather into the back of the net for L.A.’s 3-0 advantage.

With the Gonzalez goal, the Galaxy gained a 4-0 edge just minutes after they gathered a historic achievement from its captain Donovan. With the assist to Gonzalez’s well-placed header, Donovan registered his fourth assist of the night, a new career high for the SoCal native.

“Our team was great tonight, and when we defend that way it makes my job really easy; I don’t have to do a whole lot of defending, I can focus on the things I’m good at," Donovan says. "When I had the ball, guys made good runs, intelligent runs; they wanted the ball, they wanted to score so it made it really easy.”

Chivas USA returns to the field Saturday, August 18, when they travel to Colorado for a 6 p.m. match agains the Rapids. On the other end, the Galaxy travel to Ohio as they visit the Columbus Crew at 5 p.m. Wednesday.