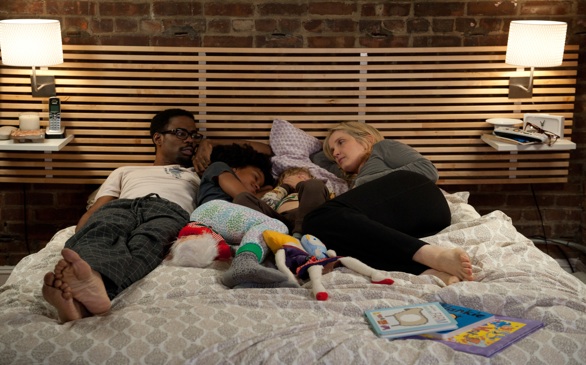 Julie Delpy reprises her role as the charmingly neurotic Marion for the sequel to widely acclaimed indie hit 2 Days in Paris. (Sadly, Adam Goldberg as Jack, Marion's love interest in the first film, does not return in this movie.)

2 Days in New York revisits Marion approximately the same number of years after moviegoing audiences were first introduced to her and Jack back in 2007. In the time since then, Marion has had a little boy, Lulu, called it quits with Jack, and recently began a relationship with new guy Mingus, played by Chris Rock. The roles have flipped this time around, and it is Marion's eccentric dad Jeannot, played by Julie Delpy's real life father Albert Delpy, and hypersexual sister Rose visiting Marion and Mingus in New York City. However, Jeannot and Rose bring with them from Paris some excess baggage: Manu––Marion's loony, loose lips, pot-smoking ex, not to mention Rose's current beau. All this set in the close quarters of Marion and Mingus's cramped two-bedroom Manhattan apartment make for a series of disastrously hysterical events.

Marion has her hands full playing hostess to her family and Manu, but on top of that she must also juggle prepping for her first-ever art show, at which she has agreed to sign away the rights of her soul to the highest bidder––partly to serve as a conceptual piece and partly to attract attention to her showcase. You will never  be able to guess who the highest bidder is...(And I won't give that away either.)

The film's star, writer and director Julie Delpy has, with the help of co-writers Alexia Landeau and Alexandre Nahon, crafted a story jam-packed with several crowd-pleasing one-liners, over-the-top absurd scenarios and one especially jaw-dropping cameo. Chris Rock in particular delivers an exceptional performance as the uncharacteristically uptight Mingus. My only upset is that it looks as though this may mark the end of the 2 Days In series.