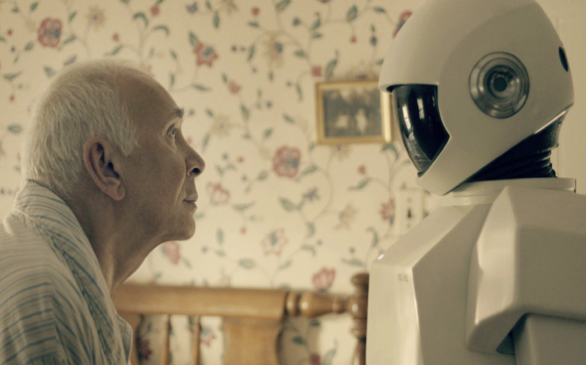 Set in the near future, Robot & Frank tells the story of ex-convict Frank Weld (Frank Langella) who comes into posession of a caretaker robot under the advisement of his son, Hunter (James Marsden). At the outset, Frank is hesitant to take in the robot, but agrees to do so on account of Hunter's ultimatum - either Frank accepts the robot or he agrees to check into an old folks home. Frank is adamantly opposed to current society's dependency on technology, and sees the robot as a personification of this problem. In time, however, his attitude toward the robot begins to change bit by bit, and his relationship with it marks his deepest one, bar none, in recent times.

Reverting back to his old ways, Frank begins abusing his friendship with the robot in an effort to relive his thrilling, high-octane glory days of being a jewel thief. He teaches the robot how to pick locks, and together the two embark on heists, abiding by the same code Frank has always abided by: only steal from the rich. Unlike the English folklore of Robin Hood, however, the "giving to the poor" part was never a part of Frank's M.O.

Sooner or later, Frank's crime spree is cut short, and his and the robot's friendship is put to the ultimate test. For all intents and purposes, Frank considers him a good friend, as legitimate as any other mortal counterpart - the robot offers Frank sound advice and an expressed interest in his well being, just as any good friend should. The climax of the film calls into question whether Frank's emotional attachment to the robot overshadows his ability to see it for what it really is: a mere simulation of a living, breathing human being.

Jake Schreier makes his directorial debut in this quirky, off-beat dramatic comedy, boosted by seasoned actor Frank Langella, who delivers a crowd-pleasing performance in his role as the biting, dry-humored Frank Weld.

Robot & Frank won over viewers when it debuted at Sundace Festival earlier this year, so don't be deterred from seeing it by the ambiguous and eerie THX 1138-reminiscent ads for the movie. Robot & Frank is a heart-wrenching film with immense compassion that delicately tackles the subject of growing old.