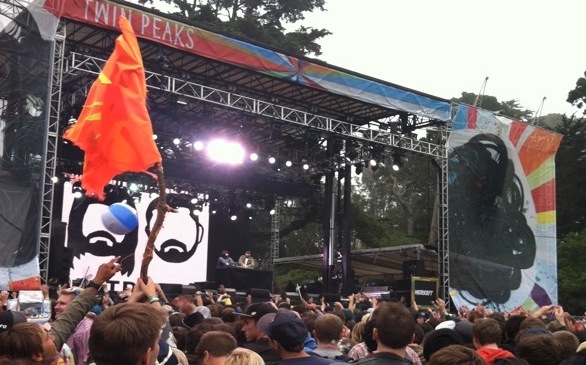 MSTRKRFT played a high-energy set on day one of the festival.
(Credit: Gabrielle Olya)

Despite the chilly weather, thousands of music fans flocked to San Francisco’s Golden Gate Park for this year’s Outside Lands Music Festival.

The park was converted into a wonderland of sorts for music, food and art lovers, with four different stages, booths selling all types of food and other wares, a pop-up dome with a club-like vibe, a comedy stage, and the very popular Beer Land and Wine Land areas –all plopped in the middle of the woods where the outside world seemed to not exist.

Headlined by Metallica, Stevie Wonder, Neil Young & Crazy Horse, the Foo Fighters and Jack White, the three-day event had a little something for music lovers of all genres.

While Beck, Foo Fighters and Neil Young & Crazy Horse took over the main stage on day one, there were several other acts that put on quite the show. Electronic acts MSTRKRFT and Justice both managed to heat up the cold atmosphere by conjuring up sprawling dance parties, complete with crowd surfing and glow sticks. For those wanting a more chill music experience, up-and-coming act Washed Out slowed down the tempo with his psychedelic synth-pop sound, visually complemented by the thick fog in the surrounding trees lit up in bright blues and purples by stage lights.

Day two featured performances by Norah Jones and Metallica, but perhaps the true highlight was the bubbly electro-pop sounds of quintet Passion Pit. The band played a number of songs from their latest release, Gossamer, but the crowd truly went wild for their performances of their most popular tracks, “Sleepyhead” and “Little Secrets.”

The sun finally came out on Sunday (appropriately enough), and the much-needed warmth was accompanied by some of the most anticipated acts of the festival, with Jack White, Santigold, Bloc Party, Skrillex and the legendary Stevie Wonder all taking part in the last day of performances. With so many incredible acts to see, the main issue for attendees on day three was how to choose between overlapping sets –which is not such a terrible problem to have as far as music festivals go!