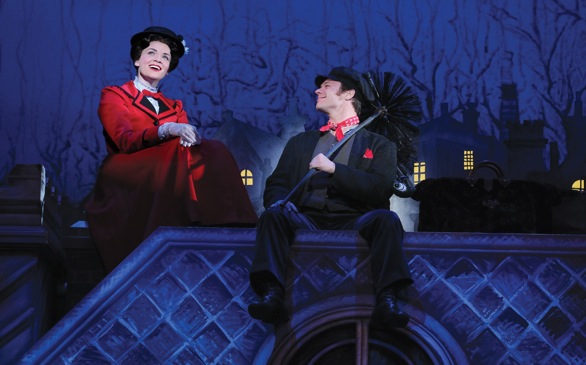 If there is one thing that I learned from the opening and closing ceremonies of the London Olympics, it is that the British have more eccentric theatrical inclinations than we do. From a mysterious appearance of Batman and Robin to a man tightrope walking towards a flaming mannequin (set to Pink Floyd’s “Wish You Were Here” of course), the Brits really know how to put on an interesting show. Who can forget the image of Voldemort battling a fleet of Mary Poppins?

Across the pond, all the way back in Los Angeles, the Ahmanson Theatre production of “Mary Poppins” doesn’t defy literary inter-universal laws. With Disney having familiarized the American audience with its 1964 film adaptation, it doesn’t offer any surprises either. There is, however, flying, moving statues and a magical umbrella –all part of a spectacular show. The ingenious staging has audiences marvel with “oohs” and “aahs”: one minute you’re on Cherry Tree Lane and in an enchanted park the next. The familiar tunes are infectious, cheery and can make even non-musical lovers hum along. Best of all, the characters are charming, and they are wonderfully played by a tenacious cast.

Actress Rachel Wallace portrays the titular star with such sassiness and magnetism that’ll make P.L. Travers proud in her grave. She sings “I’m Practically Perfect” with little trace of narcissism, so as to make eye-rolling unnecessary. Through her lead, the production delivers a swallowable dosage of gender equality and economic themes sweetly disguised in a simple and delightful story.

The Banks children could easily slip to being detestable, spoiled brats, but Cherish Myers and Zachary Mackewicz please the crowd with their precocious vocal and acting talents. Q. Smith, who plays both the Bird Woman and Miss Andrew, the “Precision and Order” to Mary Poppins’ spoonful of sugar, steals the scene every time she’s on stage, effortlessly belting out those high notes.

Overall, “Mary Poppins” is a home run production for the young ones, and even the not-so-young will appreciate the beautiful theatrics and that zany quip that only those British chaps and lasses can conceive.

“Mary Poppins” is playing now through September 2 at the Ahmanson Theatre, 601 W. Temple St., Los Angeles. Tickets start at $25, and can be purchased by calling (213) 972-4400 or online at CenterTheatreGroup.org/Poppins.